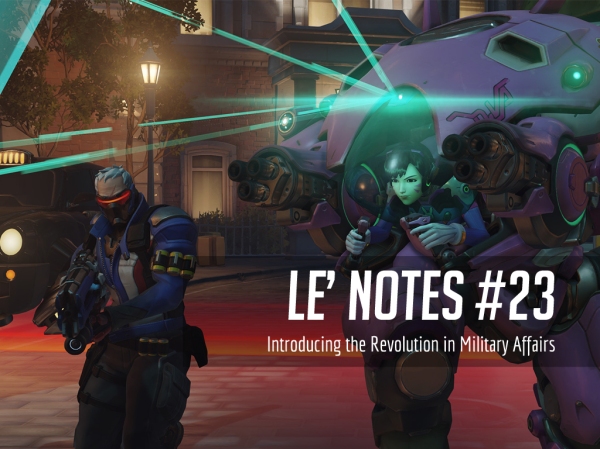 This post introduces the origins of the revolution in military affairs.

We are said to be in the middle of a self-conscious revolution in military affairs, or RMA for short. This assumption is grounded in the breakneck pace of technological advancement that’s happening almost on a daily basis. Every now and then, someone in Silicon Valley or DARPA or some whiz kid somewhere comes up with a new thing that promises to shake up or “disrupt” the entire world as we know it. Tesla Motors, for example, is trying out driverless cars. The South Korean military showcased their LEXO exoskeleton systems, which they had been developing since 2013. Suidobashi Heavy Industries have already marketed their Kurata robot, which was unveiled in 2012. The robot, which is basically just a bigger and capable exoskeleton, can be fitted with rapid-firing weapons. Although Suidobashi claims the Kurata only comes with BB guns, in the future, that may change to live ammo. However, the RMA is not just about technology. In the US.

However, the RMA is not just about technology. In the US, the Department of Defence has been constantly trying to implement their Third Offset Strategy, which (at the risk of oversimplifying) basically wants to use a combination of technology and operational art to gain an edge over America’s adversaries and maintain their alliances. With President Trump in office, America might just be great again, although the alliances part might not be.

Sure, the future looks amazing. And bleak at the same time, considering we’re developing weapons of war. But, let’s step back for a moment and reflect on this RMA phenomenon. What is it? How did it start? How did we get here?