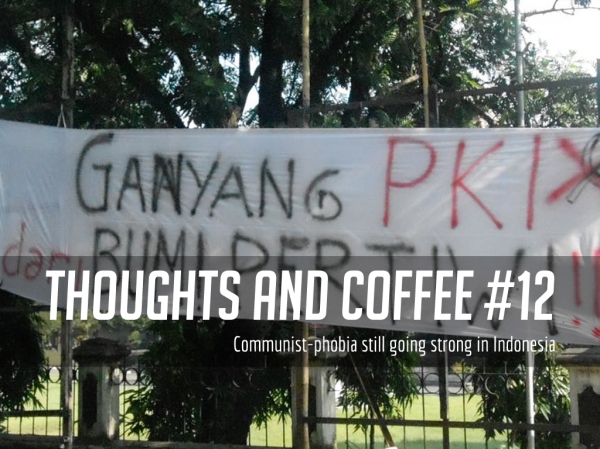 Time and time again, Indonesia has seen many political outbursts due to the inflated fear of the Red Spectre of Communism. The most recent outburst occurred at a Lembaga Bantuan Hukum (Legal Aid Institute) in Jakarta following a seminar discussing the 1965 Communist massacre. The office was surrounded by protestors, entrapping the participants inside the walls. Most of those participants were the elderly – survivors and witnesses to the bloody pogrom that marked an important watershed in Indonesian politics. It was not until the following day that participants were allowed to leave, but the damage had already been done.

Involved in this incident were anti-Communist groups and a number of right-wing organisations, such as Front Pembela Islam. This incident indicates the continued stigma of Communism in Indonesia, a result of decades of indoctrination during the New Order.

The LBH office suffered some physical damage; however, I believe we can agree that the damage to Indonesia’s budding democracy should take centre stage.

END_OF_DOCUMENT_TOKEN_TO_BE_REPLACED

This post discusses the theoretical interpretations of Indonesian politics from the New Order to the ongoing Reformasi era.

The first leg of my journey starts with understanding the different theoretical interpretations of Indonesia’s political system. Most of the scholarly work on Indonesia is focused on the New Order: its genesis, peak, and violent crumble. The market for Indonesian history is practically saturated with New Order stuff with a bit of Sukarno on the side and the colonial and ancient times (the lattermost nobody really cares about at this point, but is slightly important nonetheless). In this summary, I’ll go through the various schools of interpretation, which were mostly conducted by Western academics.

END_OF_DOCUMENT_TOKEN_TO_BE_REPLACED

A specter is haunting Indonesia – the specter of communism. Everyone’s freaking out about it, despite the Indonesian Communist Party (PKI) having been banned for almost 50 years now.

END_OF_DOCUMENT_TOKEN_TO_BE_REPLACED

In October 2016, the Islamic Defenders Front (FPI) launched their first demonstration against Jakarta’s Chinese-Christian governor, Basuki Purnama, or better known as “Ahok”. Their chant was to not let Jakarta — a city that is by character pluralistic although Muslims and Javanese make up the majority — be governed by a leader who is not Muslim and Javanese. They quoted scripture, specifically a verse from the Quran (Qs. Al-Maidah: 51), which they interpret does not allow Muslims to elect or be led by a leader who is not a Muslim.