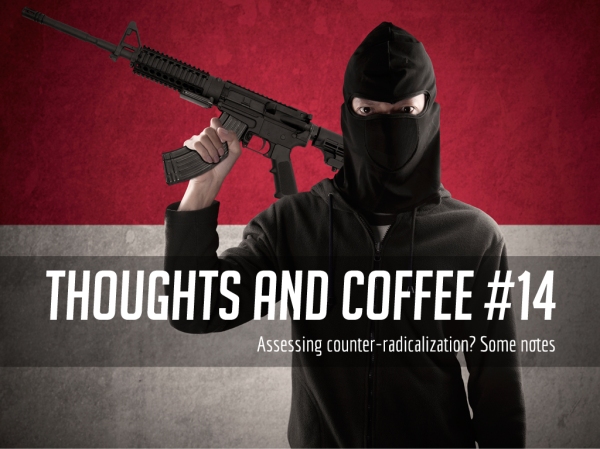 This post is a note on how we could formulate a proper assessment on counter-radicalization efforts.

How can we measure the effectiveness and success of counter-radicalization efforts?

I had the opportunity to chat with Mr Suaib Tahir, an expert staff from the Indonesian National Counterterrorism Agency (BNPT). We talked about his work at the BNPT, which involved counter-radicalization. Here are some interesting points of our swift and informal discussion.

END_OF_DOCUMENT_TOKEN_TO_BE_REPLACED

This post briefly discusses the two major approaches to addressing terrorism, the “hard” and “soft” approaches.

“We could do this the easy way or the hard way,” said the CIA officer, preparing the standard operating kit for waterboarding.

If you’re a fan of the 24 TV-series or Zero Dark Thirty and the many other terrorism-related movies out there, you’d pretty much have a glimpse of how the United States handles terrorism: showing the terrorists who’s boss. The Bush administration was notorious for launching the War on Terror, a move which did kill Osama Bin Laden, but gave us ISIS with a vengeance and a century’s worth of problems in the Middle East.

Despite some of the successes of the War on Terror, it has often been criticised as being “counter-terrorist” rather than “counter-terrorism”. The former suggests a focused obsession on killing terrorists as opposed to addressing the larger, structural issues that gave rise to the “illness” in the first place. Thus, in the recent years, we’ve seen a “softer” approach to counter-terrorism. As opposed to invading Iraq and ordering drone strikes, the soft approach attempts to address terrorism as an issue that stems from extremist ideology. What needs to be attacked is the ideology, rather than the terrorists themselves.

Both approaches have their own merits and shortcomings, and that’s what I attempt to briefly discuss.

END_OF_DOCUMENT_TOKEN_TO_BE_REPLACED

This post is mostly a summary — with additional commentary — of Rohan Gunaratna’s talk in his first session of the Terrorism, Intelligence, and Homeland Security module at RSIS.

The first thing that we need to distinguish is that there is the threat of terrorism and the response to terrorism. Like any good strategist, we need to know what exactly the threat is before issuing a response. It’s the same like answering a question. If we don’t know what the question is or what it wants from us, we can never arrive at an answer. This was exemplified correctly and hilariously in Hitchhiker’s Guide to the Galaxy, when the pan-dimensional beings created Deep Thought to calculate the ultimate answer to the ultimate question of life and the universe. But it turns out that the beings gave Deep Thought the wrong question, which resulted in the answer “42”.

So, we need to know what we’re facing and the responses that we have in our toolkit.