Coffee first as usual. I bought another batch of beans from 20mL, this time some Kintamani beans. Being Balinese, I pretty much grew up on this variant of coffee. But, I never thought I’d discover a sweet, berry-flavour with some hints of cloves Kintamani beans. It goes well with the Toraja beans I bought last week. 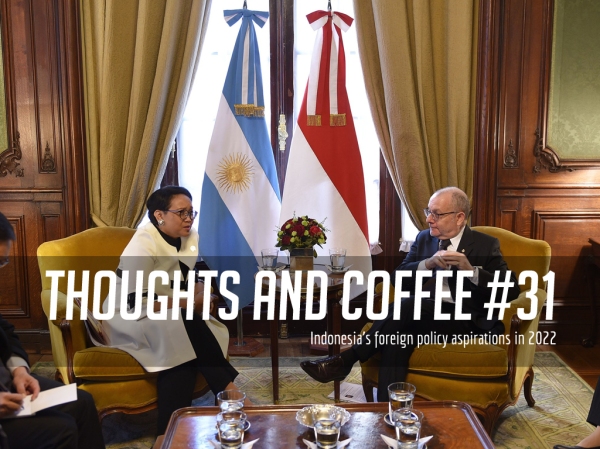 The recent press conference conducted by Indonesia’s Foreign Minister, Retno Marsudi, provides some bearings on the direction of Indonesia’s foreign policy in 2022. In this post, I summarize the press release (check against delivery here, English subtitles provided) and offer some thoughts on Indonesia’s plans for 2022.

A Happy New Year to all of us!

It’s a rather slow week, which might be a good sign. However, regional politics waits for no one. This week, I highlight some incremental regional developments in Southeast Asia, which hopefully might blossom later in the year. There are also some updates on a regional approach to Myanmar.

Once again, coffee beans from 20mL take the spotlight, but instead of a blend, I decided to purchase some single-origin beans from Toraja. I’ve always had a soft spot for Toraja beans because I like the flavor profile. These beans are from Pulu-Pulu village, which I’ve never tried. Since they were single-origin, I decided to brew them using a V60. The result was a bright coffee with hints of spice and a mellow aftertaste. It was different than what I was accustomed to, but perhaps my previous Toraja beans were roasted too darkly.

The buzz this week is about German naval diplomacy, represented by the deployment of the frigate, Bayern, in the Indo-Pacific, showing Germany’s initial commitment in the Indo-Pacific. Plus, some minor updates on politics and defense in Southeast Asia.

Coffee first: I’m having a blast trying out different blends from 20mL. It’s quickly becoming my favorite which serves its own proprietary blend of beans (along with some single origin beans). My recommendation this week is the Caramello blend, which is a bolder version of the brighter Mochademia blend. Hints of dark chocolate are prevalent and I might have tasted some spices. If the Mochademia is like a Snickers bar, the Caramello is like eating a granola bar loaded with 84% dark chocolate.

As usual, I am not affiliated with any of these products. 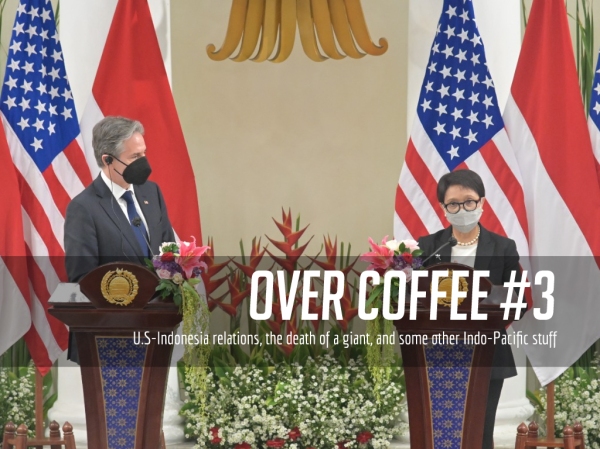 This week is abuzz with US Secretary of State Anthony Blinken’s maiden visit to Southeast Asia. His first stop is Indonesia. The visit coincides with a visit from the Russian Security Council Secretary. We also lost a towering and inspirational figure in International Relations this week. Plus, a lot of other stuff happening in the Indo-Pacific. This week’s recap comes a bit early as I wanted it to be more timely.

As usual, coffee comes first. My recommendation this week is Mochademia, a house blend of Toraja and West Java beans from 20mL, a local roaster based in Denpasar with a certified Q-grader with 13 years of experience under their belt. When paired with milk, it results in a smooth, velvety, and sweet coffee which reminds me a Snickers bar sans the copious amounts of refined sugar. As usual, I am not affiliated with any third-party products mentioned here.

A recap of weekly events, from 1 December to 9 December, ideally discussed over some coffee. My recommendation this week is Smoking Barrel’s Dynamite house blend, which uses a mix of Brazil and Toba Aek Raja beans (newer batches replace the Brazil with Sindoro beans), resulting in a reasonably bright white coffee with hints of chocolate (this is not a sponsorship deal).

This week’s notable events includes ARNEX-2021, gray-zone strategy, and the opening of the Bali Democracy Forum. 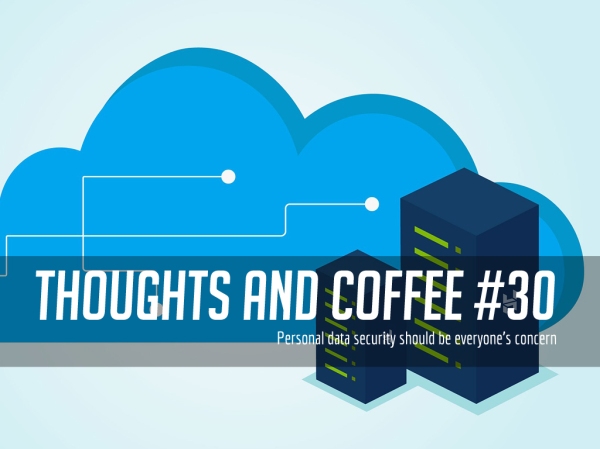 Indonesia is the largest digital market in Southeast Asia, boasting around 202 million citizens that have access to the internet. Despite a persistent digital gap and issues in financial inclusion, Indonesia has seen an astonishing rise in domestic unicorns such as Gojek, Tokopedia, Bukalapak, Traveloka, and most recently, Ajaib.

Government services are also increasingly becoming digitalized. The tax filing system, for example, has almost been fully digitized, allowing citizens to file taxes without visiting the tax office. During the COVID-19 pandemic, government-issued vaccine certificates were also distributed online through the contact-tracing app, PeduliLindungi, in lieu of traditional paper certificates.

This massive drive towards digitalization, however, has yet to be accompanied with adequate cybersecurity measures. In July 2021, a group from VPN Mentor discovered vulnerabilities in the electronic Health Alert Card (eHAC) application which put the personal data of around 1.3 million Indonesians at risk. The application was developed during the Covid-19 pandemic as a tracing application for domestic and international travelers. The government’s response, however, leaves much to be desired. VPN Mentor contacted the Indonesian Ministry of Health twice in July 2021, but the ministry failed to respond. Another report was filed to the Indonesian Cyber Security Agency (BSSN), and following the report, the eHAC server was shut down. In September 2021, the police officially closed the investigation, citing a lack of evidence that a breach has occurred. 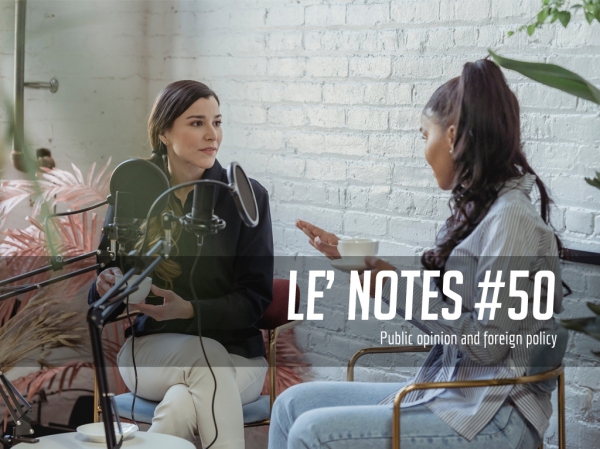 One of the biggest problems with academics is that they can never say “no” when a new opportunity for research comes. Then, all of a sudden, there’s seven projects—two journal articles, two book chapters, two op-eds, and one conference paper—due next month.

Hopefully that scenario is fictional. But, in this part, I want to focus on project management, which is less about managing individual drafts and more about planning for the bigger picture. These are some of the processes and methods I follow to manage my workload (which never seems to go away).

Like the previous post, I will be mentioning third-party software (mostly Notion) which I am not getting paid to promote. That being said, you can always find alternatives that work for you.