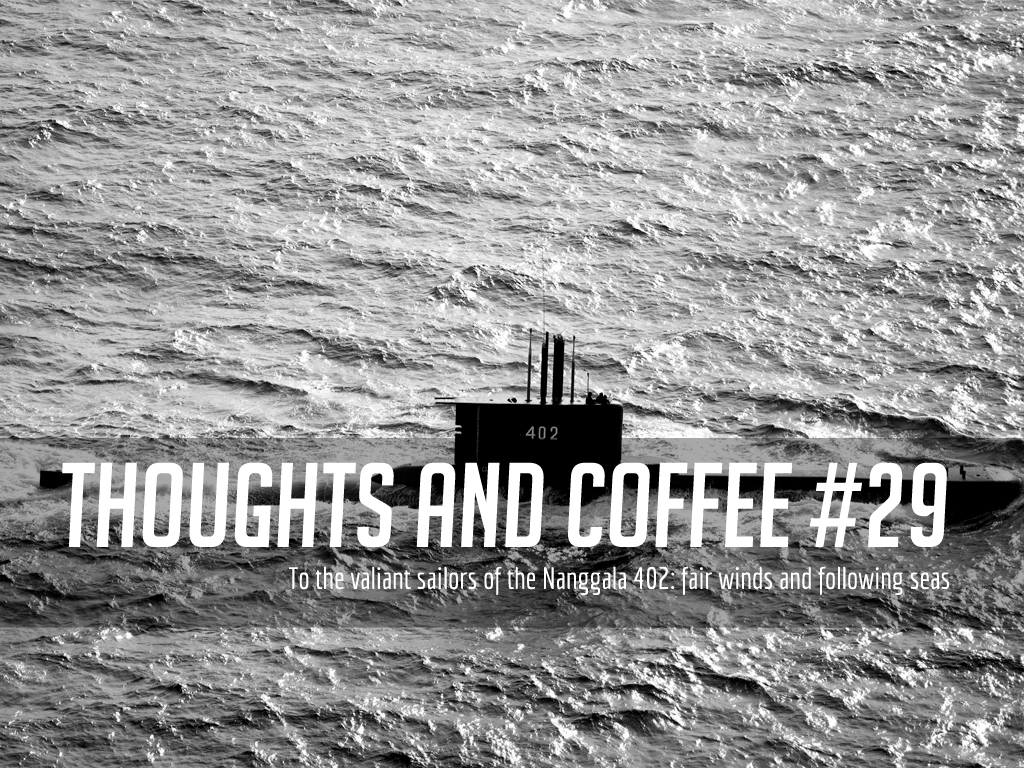 The crew of the KRI Nanggala 402, a 44-year-old submarine acquired from West Germany and the prideful older sister of the pack, began the exercise by submerging to the depths. But when the submarine crew missed their routine check-in, they started to worry. The last contact was on Wednesday at 0430 hours.

The Nanggala was old, but reliable, the surface operators hoped. She’ll see it through to the end. She’ll come back with her crew safe and sound. But the Nanggala never checked in again. It couldn’t. Its electrical systems had failed, and it could not establish contact, let alone surface.

What was expected to be a routine naval exercise had turned into a search-and-rescue mission and a race against time. The Nanggala, and her crew, were lost in the waters north of Bali.

The clock was ticking. The Nanggala’s oxygen reserves would only last for 72 hours, meaning they had to be extracted before Friday at 0300 hours. Tardiness, even for a second, would put the crew’s lives in peril.

The search was on. Neighbouring countries pledged help: Singapore, Malaysia, Australia, India, and the United States sent assets to help with the search. Everyone’s eyes were on the time-pressed search for the Nanggala and her crew. International coverage spiked and the Nanggala trended.

As the deadline grew closer, hope dwindled. When the deadline passed, what little hope remained had vanished. The Nanggala was declared sunk at 850 meters below (far beyond its ‘crush depth’) and its crew of fifty-three good sailors began their eternal patrol.

The loss of the Nanggala is a tragedy which will definitely serve as a hard-hitting, heart-wrenching lesson for the Indonesian defence establishment. The submarine was old and while some would say that it’s too early to declare age as the sole culprit for the tragedy, age certainly served to exacerbate the technical roots of the electrical failure which contributed to the tragedy. The age of the submarine, however, only serves as a convenient shorthand for the numerous challenges in Indonesia’s defence acquisition.

Despite a recent naval modernization drive with two deals, each worth around a billion US dollars, for six new Type-209 submarines at the centre (five of which have been commissioned), the rejuvenation of Indonesia’s submarines continues at a snail’s pace. In a heartfelt obituary, Edna remembers Heri Octavian, the captain of the Nanggala, lamenting about the poor state of naval platforms and a generally adversarial political climate for naval acquisition.

“…he [Heri Octavian] hopes decisionmakers really care about the TNI and the soldiers, not just for their own personal interests or financial gain.”

These problems are on top of the shoestring annual budget the Navy is expected to work with, despite pledges since 2014 to increase the defence budget. The 2021 defence budget was IDR 136.9 trillion (roughly USD 9.3 billion). While that number remains among the highest among the ministries (it’s neck-and-neck with the Ministry of Public Works’ budget), it is still shy of 1 percent of the country’s GDP and has been that way since 1999. In comparison, only Japan maintains a defence budget of around 1 percent GDP; even our neighbours Singapore and Malaysia allocate more for defence (around 3.2 percent and around 4.4 percent respectively). Even assuming the entire USD 9.3 billion gets shared equally among the services and the Ministry (which is hardly the case), this still leaves the Navy with around USD 2 billion to spend. The actual number earmarked for fleet maintenance and upgrades, however, is closer to IDR 8.03 trillion (USD 553,000). This is a tad less compared to the Air Force (around IDR 8.19 trillion).

Is it possible to increase the Navy’s budget and perhaps see better performance? It may be, but it would require strong political will. That’s a goal for the longer term. Will a bigger budget guarantee better performance? I’m not entirely sure, but at least with a bigger budget, we could afford to take better care of both our servicemen and servicewomen and our equipment. We could afford to care for those who decide to live an arduous life so we may sleep peacefully.

It should, however, never take a tragedy of this scale to finally convince policymakers to start thinking more about Indonesia’s defence. It’s just too much a price to pay.

To the families of the sailors aboard the Nanggala, I can only offer my thoughts and prayers. May you be granted strength in this distressing time.

To the valiant sailors of the Nanggala, thank you for your service. May fair winds and following seas accompany your eternal patrol.