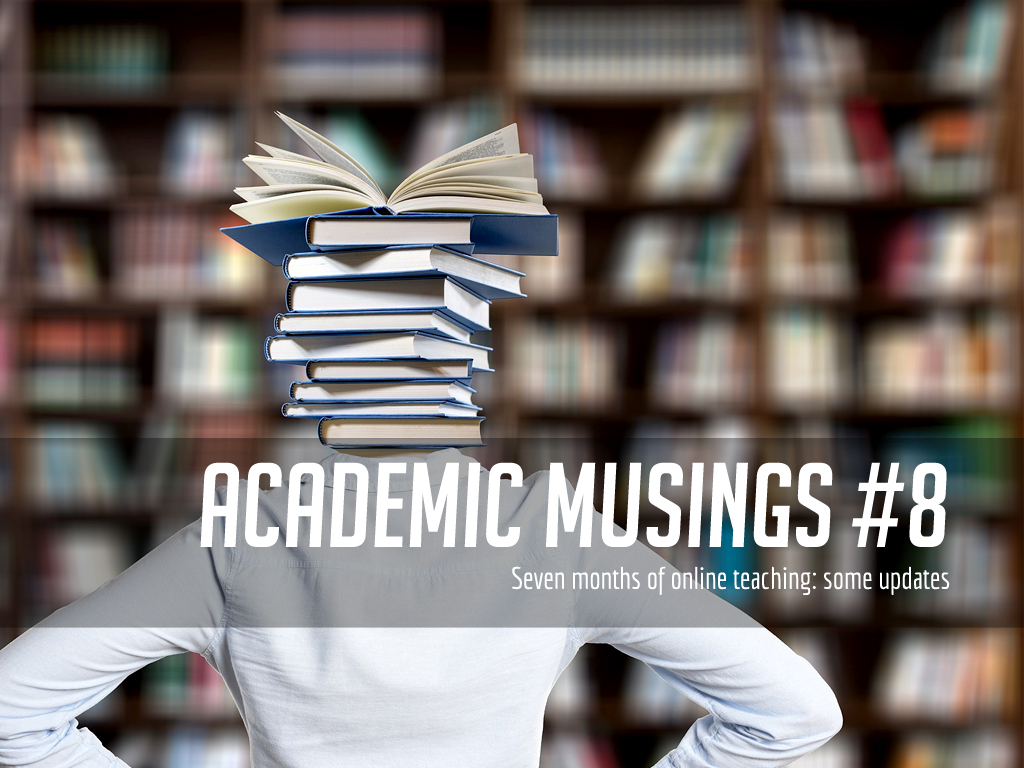 In the middle of March, my university decided to suspend face-to-face meetings and move everything online. It took me a while to get adjusted to the format and tempo of online classes (I’ve covered this in a previous post), but eventually, I got the hang of Discord, Google Meet, and even Moodle, where I do the bulk of my quizzes.

I really don’t feel like learning is happening. Most of my sessions are synchronous, i.e., students log into Meet and I deliver the day’s materials, often stopping for short bathroom breaks or to address questions. While this is no different from what I do in a live classroom, it just feels… awkward. I am talking to a screen, to a bunch of faces like I’m talking to the cast of the Brady Bunch. As I don’t enforce a “cams on” policy, it feels even more uncanny as I’m practically speaking to a bunch of letters on screen, unsure of whether I’m going too fast or I’ve lost the entire class’s attention. This makes me pause more often as I ask for clarification and to make sure everyone is on tracking. Teaching becomes a slog, not an enjoyable experience both for me and perhaps even more so for the students.

I never understood why some of my other colleagues enforce a mandatory “cams on” policy. Barring special circumstances, such as presenting their work, I often allow students to keep their cams off. I think Tabitha Moses covers this in her neat 5-point article arguing why students should be allowed to leave their cams off. I’ll just repeat some of her salient points here. While some might find it trivial, the reality is that forcing students to turn on their cams is akin to asking them to reveal a part of their homes, which is, for all intents and purposes, a private sphere. Enforcing cams on, then, would be an intrusion of their privacy, which only serves to unduly increase their stress and anxiety. Then, there’s the issue of technology and internet bandwidth. It is obvious that streaming video is costly in terms of money, internet bandwidth, and CPU performance. Most students rely on unreliable mobile broadband (even more so after the government rolled out subsidised data plans) and service is patchy, particularly outside of Java. The more well-off can use dedicated home Wi-Fi or even faster (though expensive) LAN fibre broadband, however, they remain in the minority. Streaming is also CPU-intensive, and most students usually have low- to mid-range laptops/computers which cannot handle multitasking well.

I had to adjust the format of my student activities. While I could usually come up with a spontaneous break-out activity in regular classes, Meet’s lack of break-out rooms meant that I had to rely mostly on Discord. I assumed that my students would be savvier with Discord, but it turns out Discord wasn’t too reliable. Students had to learn the Discord interface, and some couldn’t use the full range of its functions due to limited bandwidth. This was evident in my attempt at running my annual simulation exercise in my Defence Cooperation course. Whereas I could usually implement mechanics such as action cards or resource management, I felt overwhelmed with managing and shifting through the numerous screens (and this is coming from someone who almost always works with a two-screen setup). As a result, I had to downscale the more demanding format of the simulation exercise to a simpler, moderated format. On the bright side, most world leaders are doing this anyway, so perhaps students are indeed learning “real-life skills”. For the other classes, I’ve designed student panels. These are structured a lot like webinars and academic conferences, where a group of students can speak on a certain topic while also showcasing their individuality. The problem often lies in engagement.

I get the sense that students are more distracted and fatigued than usual. “Zoom fatigue” is a real thing, and for those taking a full class load of 5-6 courses per semester (not including other videoconferences or webinars), I’m pretty sure they’ve had enough of Zooming or Meeting each other. During my office hours and in the no-holds-barred channel (which I aptly named #anarchy) on my Discord server, I’d often listen to complaints from students that online school is “making them dumber” and how they want to go back to “real school” as soon as possible. I believe this is even more so for the freshman classes. Learning from one’s room, isolated from each other, they lose out on opportunities to interact with their peers and nurture the academic discussion skills that would benefit them later.

Not everyone is motivated, and this is perhaps where students often struggle. Students have confided that they often feel a “lack of motivation” for continuing their studies. They ask for “tips and tricks” to combat the generally monotonous rhythm of the days that pass. But there are no easy lifehacks I can provide. It’s the usual advice: have a routine and don’t be too hard on yourself. Those who manage to stay motivated often have the support of family members, while those who do not, often have to struggle alone. Once again, inequality rears its ugly head.

Speaking of inequality, while many hail the internet as great equaliser of sorts, many still forget that it is shaped by political forces in the “meat-sphere”. I have several students who are based in China, and due to the institution’s insistence on using Google Meet as the primary platform for classes, these students are completely barred from entering my classes. The luckier ones have access to VPNs, but it often throttles their speed, causing them to frequently disconnect. They also can’t participate fully in class discussions. It is rather ironic that despite their education being funded (in full or partially) by the state, it is also the state that impedes their education.

It’s a hard time for everyone, and I find myself uttering more encouraging words than I’m usually accustomed. Students are anxious. They are bored. Many are afraid of their grades, some are concerned about their job prospects, and everyone is generally on edge. When will we return to normal? I don’t know whether a return to the status quo ante is even possible. Reopening schools is easier said than done (New York’s experience is indeed an eye-opener of how hasty policies have disastrous effects) and in a country where the daily number of cases continue to skyrocket, coupled with inadequate testing and general disregard for physical distancing protocols, reopening seems like a distant pipe dream despite students and faculty craving to return.

I want to end this with some optimistic witticism. But for now, the usual mantra applies: stay safe and stay healthy.