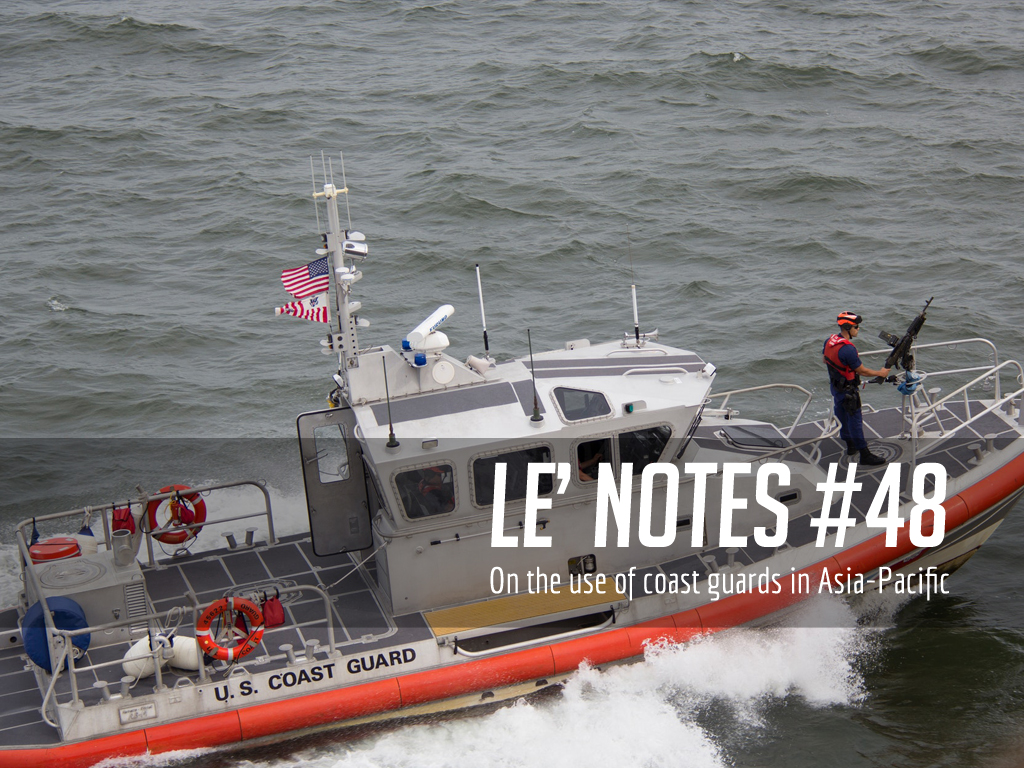 The coast guard—specifically the US Coast Guard—is usually the butt of jokes in the military. Their job is like the Navy, but with smaller boats, guns, and less action (even though there were some moments where the USCG did shine).

Jokes aside, coast guards are an important asset in maritime security. They handle maritime security at home, dealing with the “small” stuff so the navy can handle the bigger threats out there in the high seas. The Coast Guard’s role is largely tied to law enforcement: policing territorial waters and keeping them safe from illegal fishing, pirates, human traffickers, and drug smugglers. Recently, coast guards have started to take on more expanded roles, particularly in East and Southeast Asia. The Chinese Coast Guard has been making headlines lately due to their increased presence (and aggressiveness) in the South China Sea which adds on to the regional tensions. This has been followed by the expansion of other coast guards, such as Japan, Philippines, and Vietnam.

As interest in and use of coast guards will likely increase in the near future, I’ll be reviewing the literature to understand how coast guards have been used as a tool of statecraft over the years. I’ll focus more on the Asia-Pacific, since that’s where coast guards are getting more attention.

Why have a coast guard?

We first start off with asking an important ‘why’ question: why do states even need a coast guard in the first place?

The obvious, simple answer: to help keep our waters safe from all the bad stuff that the navy doesn’t have time to handle.

Most traditional coast guards (‘traditional’ in the sense that they have been around longer), such as the US Coast Guard and British Coast Guard, were established to assist oversee the safety of important domestic maritime assets, such as lighthouses; or to prevent crime from endangering trade, such as smuggling and piracy. The US Coast Guard was initially called the “Revenue Cutter Service” and put under the Secretary of Treasury. Their main jobs were to oversee the safety of ports and lighthouses (quite important back in the 1800s) and to counter piracy. Over time, their repertoire of duties has expanded to include search and rescue, disaster relief, and even environmental protection.

Contrast these functions to the navy. Though Booth (1979 [book]) posited that navies essentially have a “triple role”—warfighting, law enforcement, and diplomacy—navies are mostly structured to optimally perform their warfighting role. The law enforcement role is often secondary, even tertiary. Hence, developed states tend to split the law enforcement burden with a separate coast guard. The separation of duties also has an economic rationale: it’s often more cost-efficient to have two, single-function things that do the job well, instead of a jack-of-all-trades single unit.

To visualize the “navy-coast guard split”, this visual aid from Geoffrey Till [book] might help. Imagine a slider. The area of the triangle represents the range of duties of the agency (grey for the Navy, white for the coast guard). You can push the slider in any way you want. Notice that if you slide it to the left, the navy has more responsibilities compared to the coast guard and vice-versa. The default position as shown in the diagram is close to a 50-50 split.

There’s actually no “right” formulation; it really depends on the condition of the country in question. Some countries, perhaps due to economic constraints, don’t have a well-developed navy and prefer to get by with cheaper cutters; whereas other countries have power-projection ambitions and are willing to pay the price for a formidable navy. This is not to say that navies cannot do what coast guards can; it all goes back to the preferences and pre-existing structure of domestic bureaucracies. In Indonesia, for example, maritime law enforcement has traditionally been the domain of the navy. It was only recently that a coast guard equivalent has been established to take on law enforcement duties, but even then, the navy still plays a large role.

On the contemporary use of coast guards in the Asia-Pacific

While the duties of coast guards haven’t changed a lot from the 1800s, they are on the rise due to their usefulness in dealing with new types of potential conflict. This is particularly evident in East and Southeast Asia, where legal maritime claims are complex, navies are (relatively) smaller in size, and tensions often run high (think South China Sea and East China Sea). In this new maritime environment, coastal states have bestowed coast guards with new duties on top of their traditional ones: to be responders deployed in more ‘sensitive’ missions which often occur in disputed maritime territories (see Bateman, 2003[PDF]). As a result, we now see more interaction between coast guards and navies in these waters, which Koh and Bowers (2019, p. 5 [book]) termed the “navy-coastguard nexus”.

However, before we start, I think it’s useful to first discuss the legal basis of the use of coast guards. There’s actually no clear legal basis supporting or discouraging the use of coast guards to safeguard maritime territory. In other words, as long as a state does not cross the threshold of what constitutes “law enforcement” activities, coast guards are fair game. This is reflected in the 2016 arbitration case, Philippines v. China (PCA Case no. 2013-19), where the PCA found that Chinese coast guard activities had violated UNCLOS and COLREGS for posing “serious risk of collision and danger” to Filipino personnel.

So how have coast guards been used in the Asia-Pacific? I’ll cover only two countries, China and Japan, due to limitations of space. Perhaps I’ll cover others in another post; if you’re interested in other coast guards, I recommend reading Koh’s and Bowers’ edited volume, Grey and White Hulls.

I’ll first cover Japan, as their coast guard development has been quite rapid in the last two decades. Unlike their counterparts in the Asia-Pacific, Japan faces a challenge of being constrained by its pacifist constitution. They’re barred from possessing offensive military power, which in this case, includes power-projection capabilities (despite having a blue-water navy). However, Japan also faces increasing challenges from primarily China, especially in the disputed Senkaku Islands.

To address these challenges without provoking its neighbours and betraying its pacifist constitution, Japan expanded the functions and capabilities of the Japan Coast Guard (JCG for short). These expansions began with a revision of the Japan Coast Guard Law in 2001, which allowed the JCG to use armed force against suspicious boats. The first use of force was against a North Korean spy ship in 1999. As Samuels (2007 [paywall]) observed, the JCG received a lot of political support, which led to budget increases and the eventual addition of a counterterrorism, counterpiracy, and regional cooperation role for the JCG. Shimodaira (in Koh and Bowers, 2019 [book section]) showed that both JCG and JMSDF have been essential in addressing China’s grey-zone challenge in the Senkaku Islands.

When it comes to coast guards, China boasts the largest fleet. Thanks to massive state investment in non-military assets over the last decade, China has managed to expand its fleet of coastguard and paramilitary boats, which are used to assert China’s claims in the South China Sea and distant-waters fishing (see Zhang and Bateman, 2017 [paywall]). This is considered new, as usually, states would use navies to assert sovereignty while coast guards stayed home for law enforcement (see Morris, 2017 [PDF]).

What is interesting in China’s case is the increased use of paramilitary assets in enforcing South China Sea claims. Andrew Erickson and Connor Kennedy have done a lot of work chronicling the rise of the so-called Chinese maritime militia (for example, this [PDF] and this [book]). Formally known as the People’s Armed Forces Maritime Militia (PAFMM), the maritime militia is a paramilitary wing of the Chinese Navy. As Connor and Erickson describe, they are “like a tetherball” to the Chinese Armed Forces, ready to be deployed in many different directions whenever needed. They are an essential element in China’s “grey-zone strategy”, which relies on the ambiguous nature of these paramilitary units (often working in tandem with state maritime law enforcement agencies, such as the Coast Guard).

There have been multiple documented cases of encounters between the Chinese maritime militia clashing with other states’ maritime law enforcement units, such as in the vicinity of Pagasa Island and the Paracels.

As tensions rise in the Asia-Pacific, countries are turning to coast guards as an alternative tool of statecraft. Some are expansions of their traditional law enforcement duties like counter-piracy and counter-smuggling. Newer uses, as China demonstrates, include the coast guard being used to assert sovereignty in disputed areas. In this case, the use of the coast guard (and other paramilitary units), while being less provocative than naval assets, also blurs the line between military and non-military, which have further legal and strategic implications.