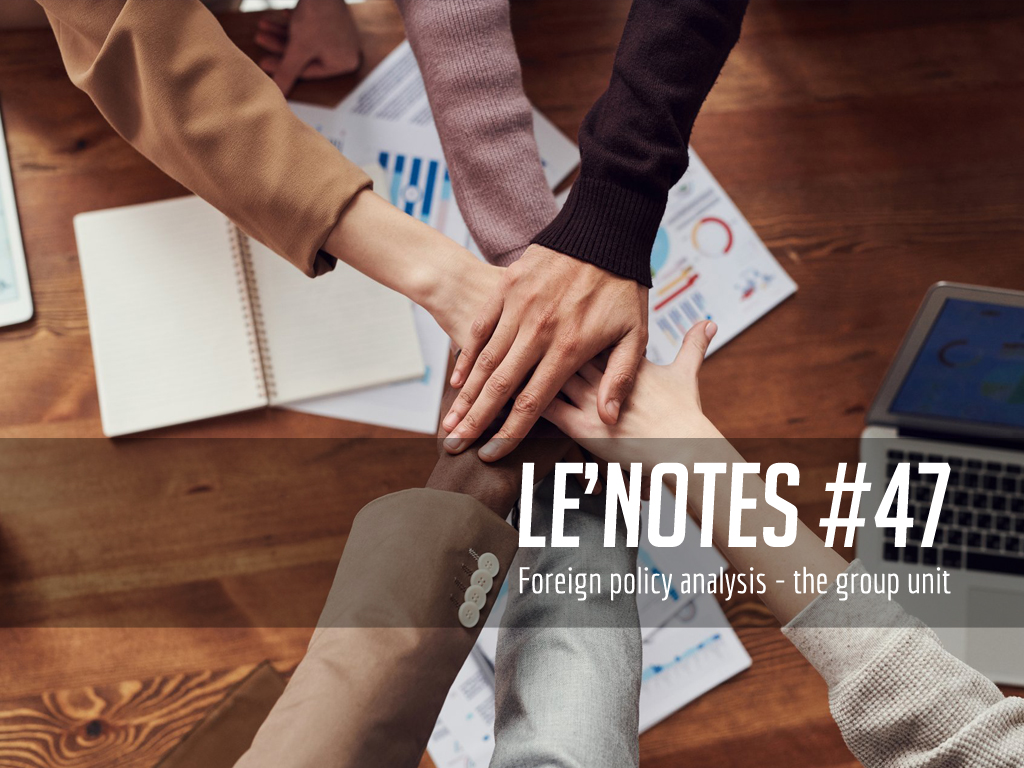 As I covered in Note #44, the individual leader is not the only person making foreign policy decisions. Even if the buck stops there, the buck may have been passed from one person to another, and in the process, the final ‘buck’ is a result of a synthesis of often conflicting opinions and interests. In this note then, we’ll explore how groups, especially those close to the leader, have a hand in shaping foreign policy decisions.

Small group dynamics widens the scope of the individual level to try to understand the political context surrounding the leader. Now, leaders don’t make foreign policy by themselves. They may be the final arbiter, but before they reach that stage, they interact with others. Kings used to have close advisers or consuls who would provide expertise and advice if the King faced a political problem. These days, leaders have ministers, expert staff, and even private third-party consultants. However, most leaders have a close inner circle. To draw from pop culture, in the series House of Cards, fictional president Frank Underwood is frank to the audience (pun intended) and even proud of the fact that he has managed to “train” and keep a small loyal group of people around him. In deciding whether to advance a specific political move, Frank usually consults with either his wife (spoilers, she wins in the end) or Stamper.

A key concept at this level is groupthink, a term coined by Irving Janis. Groupthink, put simply, is the desire to achieve group consensus and minimize dissent. Think of when you and your friends are trying to decide on a place to eat. You don’t particularly like hamburgers, but your friends want to go to Burger King. Instead of disagreeing, you decide to “take one for the team” and end up joining them at Burger King even though you actually wanted Italian.

In foreign policy, the Bay of Pigs invasion is often used as an example of how groupthink affects foreign policy. Operating on false assumptions, and with little critical input from his close advisers, John F. Kennedy made one of the most disastrous foreign policy decisions in the Cold War.

Small groups may be characterised as either being formal or hierarchical, competitive, or collegial. These characteristics are based on whether the group is centralised or decentralised, and the preferences of the ringleader.

A hierarchical group is usually the standard template: there’s a clear structure in the group, with the leader making decisions and the underlings executing these decisions within their specified responsibilities. Advice from a junior staff member, for example, would need to travel up the chain of command, altered by their superiors, until it reaches the highest in command.

A competitive group, on paper, would put the leader at the centre and encourage competition among their advisers or staff in order to incentivise the production of good advice. Communication between the leader and advisers would largely be informal, and advisers would be incentivised to seek ‘better’ information than others so they may present their findings to the leader. While competition may bring out the best among advisers, this structure would also be prone to infighting. A collegial group is similar to the competitive group, with the difference being that the leader encourages cooperation among advisers to provide the best advice.

Foreign policy is not the product of a single person or a small group; it is created by bureaucracies, and these bureaucracies do not always cooperate with one another. Both approaches were coined by Graham Allison (and later, Philip Zelikow) in his 1971 (later updated in 1999) work, Essence of Decision.

The organizational processes model, or Allison’s Model II, assumes the foreign policy elite as a typical organization, working based on specific procedures and within a specific organizational culture. For them, foreign policy issues aren’t addressed as a whole. Instead, they are broken down into manageable pieces, which are then addressed using a specific procedure. The logic is simple: if you can solve the parts, one at a time in an organized manner, the bigger problem will eventually go away. Foreign policy, therefore, is a result of these procedures.

A small-scale application of Allison’s Model II can be seen in the “cult of the offensive” arguments in explaining the outbreak of WW1 (see Van Evera, 1984 [paywall]). Simply put, since militaries believed in the power of a fast offensive, there were massive incentives to attack first. The process of mobilization, a typical operating procedure, once triggered, would be difficult to halt and this would send European armies tumbling towards an inevitable war (Levy, 1986) [paywall]. In the Essence of Decision, Allison explains the choice to blockade Cuba as a sort of “satisficing”. Kennedy’s EXCOMM, despite favouring airstrikes to neutralize the Soviet missiles in Cuba, the decision would have caused a lot of collateral damage if they were to follow the Air Force’s plan. The blockade was then decided because the Navy’s plan fit the needs of the situation and Kennedy could communicate directly with the navy chiefs. Given the delicate nature of the situation, an option that offered more control seemed more preferable.

While the organizational model may have some power in explaining the day-to-day routines of governments, it rests on one assumption: that organizations work like a well-oiled machine. Often in reality, government organizations have to fight for limited budgets, are blinded by sectoral ego, and have fundamentally different perceptions of external actors. As much as we like to think that democratic institutions govern the people who represent us, they are, by either choice or design, politicians. And politicians will engage in politicking and bargaining in order to gain clout. When organizations fight with one another, this is known as the governmental politics approach, or the Allison Model III.

Okay, but that’s just organizations or committees as a whole right? When representatives of those committees come together to discuss national security, they’d surely act like rational beings, no?

Not exactly. They’ll still tend to fight among one another because they represent the preferences and interests of the committees or agencies from which they came. Kennedy, for example, was gunning for reelection. Hence, he preferred a more confrontational approach to Cuba instead of a diplomatic one. Even within EXCOMM, there were representatives who preferred airstrikes who clashed against blockade supporters (JFK’s brother, Theodore, for example, supported the blockade). JFK was also reluctant to trust the CIA, especially after the Bay of Pigs incident, and in an effort to appear overtly hawkish, rejected peaceful diplomatic proposals from Adlai Stevenson, US Ambassador to the UN.

It turns out that leaders often have to filter and accommodate input from many people in their small groups before committing to a decision. Even if the leader’s personality may have a hand in influencing decisions, and it is true that the leader has executive authority, small group dynamics—be it competitive or collegial—also affect how decisions are made.