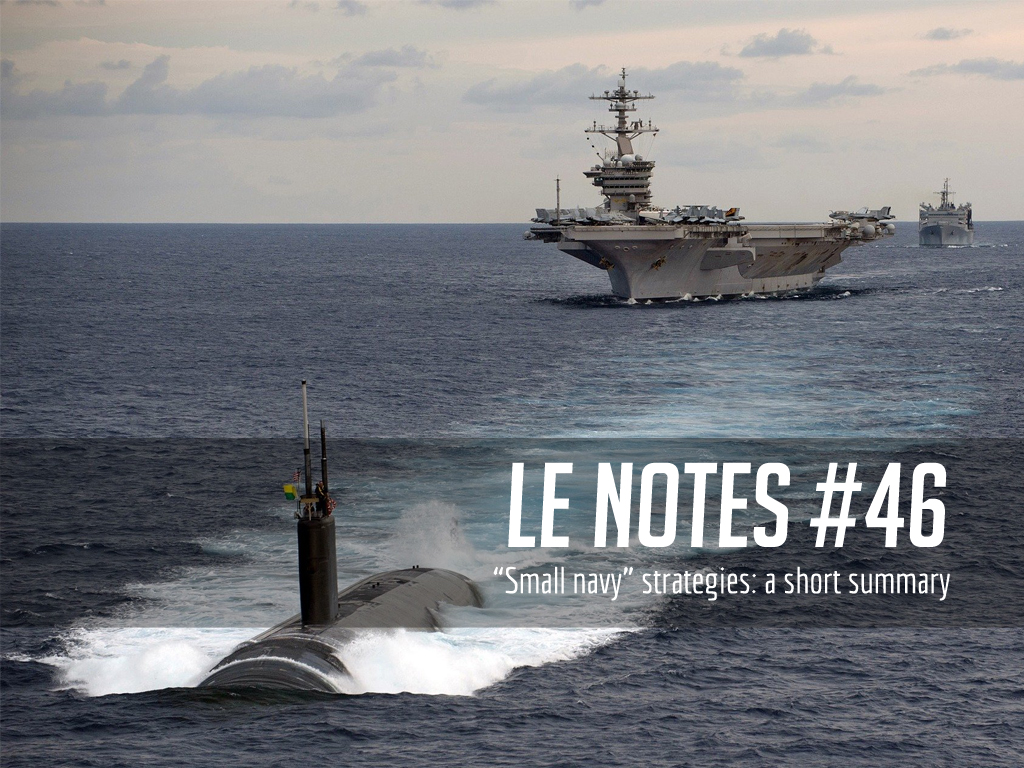 In Note #6, I briefly discussed Mahan and Corbett’s views on naval power. What I neglected to cover was, what I call, “small navy” strategies. These are essentially naval strategies used by a weaker power against a stronger power. I’ll be covering the Jeune Ecole and the fleet-in-being strategy. Most of what is written here is a summary of Ian Speller’s Understanding Naval Warfare, Chapter 3.

Mahan advocated securing ‘command of the sea’, a feat which requires the destruction of the enemy fleet as a way to control the maritime domain. This strategy, however, would only be feasible for large and powerful navies capable of exercising naval preponderance. Weaker navies, when facing stronger navies, would have to get creative in their efforts to undermine the adversary’s attempts to establish command of the sea.

So, where could the weaker power strike? As Mahan posits, a big navy is a natural result of extensive maritime commerce. The navy is needed for the protection of maritime trade, which in turn, allows the navy to grow in power and reach. Therefore, it would be obvious to strike the jugular, which in this case are the routes of commerce that the navy is supposed to defend. Hence, the foundation of a ‘weak’ strategy would be raiding commerce. This was practiced by Britain against the Spanish in the 16th century, and later the French in their wars against Britain in the 17th century.

Guerre de course, or commerce raiding, became a central feature of French naval strategy during the 19th century. Unlike Britain, France had to handle two geographic ‘theatres’ with two equally menacing adversaries: the maritime theatre, where the British Navy was dominant; and the land theatre to the eastern border, where a unified Germany stood strong. Being in the middle, France had to make some tough strategic decisions. Should they focus on building more warships or beef up their land power?

Given this dilemma, an emerging school of thought, known as the “Young School” or Jeune Ecole, advocated a sort of middle way. They proposed focusing on la petit guerre navale, or “small naval war”. The idea was to focus on harassing and denying the British Navy control of the seas using small fast torpedo boats, medium warships, sea mines, and coastal defenses. A naval blockade would then be difficult to enact, as the fast craft would (theoretically) be able to “run the blockades”. The fast craft could also harass enemy shipping, which would cut British supply lines, thus suffocating Britain. In sum, the overarching goal was not to destroy the enemy fleet, but instead, as Speller writes, to “disrupt British trade, undermine British finance, cause social unrest ashore and thus force the government to come to terms.” [book]

In principle, the Young School is similar to guerrilla warfare at sea. The idea is to harass the adversary into submission. However, the strategy would only work on adversaries who are highly dependent on the sea. It would have less effectiveness on an adversary that still had a land advantage, as they could rely on land trade routes.

Under the rule of Kaiser Wilhelm II, who was an avid reader of Mahan’s works, Germany embarked on a sprint to reach the status of a naval great power. There was, however, a problem. The British Navy was still the dominant navy in Europe, which frustrated German planners. It was evident that commerce raiding did not have its intended effect, so another approach was needed.

Enter Rear Admiral Alfred von Tirpitz. He proposed ‘risk theory’ (Risikogedanken) as a solution to Germany’s dilemma. Instead of proposing to harass a mightier fleet, Tirpitz’s risk theory was founded on strategic distraction as a way to exhaust the adversary.

In a similar fashion to Clausewitz, Mahan posited that an attacking force should have at least a one-third advantage over the defending forces. If the Germans had 30 warships, then theoretically, the British Navy would at least need around 40-45 warships to be sure of defeating the Germans. The British would then be forced to concentrate their fleet against the Germans, either by producing more warships (which could exhaust British finances) or by diverting warships from other duties (which would leave gaps in British control of the sea). Either way, the aim of the strategy was to distract the British by increasing risk. If the British downplayed German naval development, they risk losing superiority; but if the British overcommit resources, they’d face an economic dilemma too.

Tirpitz’s strategy actually backfired. Britain responded by accelerating the development of their fleet, leading to the Anglo-German naval arms race. Britain was the clear winner of the race. So, instead of exhausting British coffers, it ended up exhausting German finances.

Tirpitz also underestimated British diplomatic efforts. Britain trusted the defense of its colonies to the United States and Japan, a move which allowed Britain to concentrate its fleet in the North Sea to address the German threat. In 1914, Britain had 29 warships in the North Sea, while Germany had 18 warships. British naval dominance had not been broken.

When facing a superior adversary, it is folly to face them head-on. Indirect strategies may increase the odds of winning, but often carry high risks, especially if they rely on assumptions of enemy movement. Commerce raiding seems to be the most effective way for a weaker power to face a stronger adversary, especially when submarines are involved.