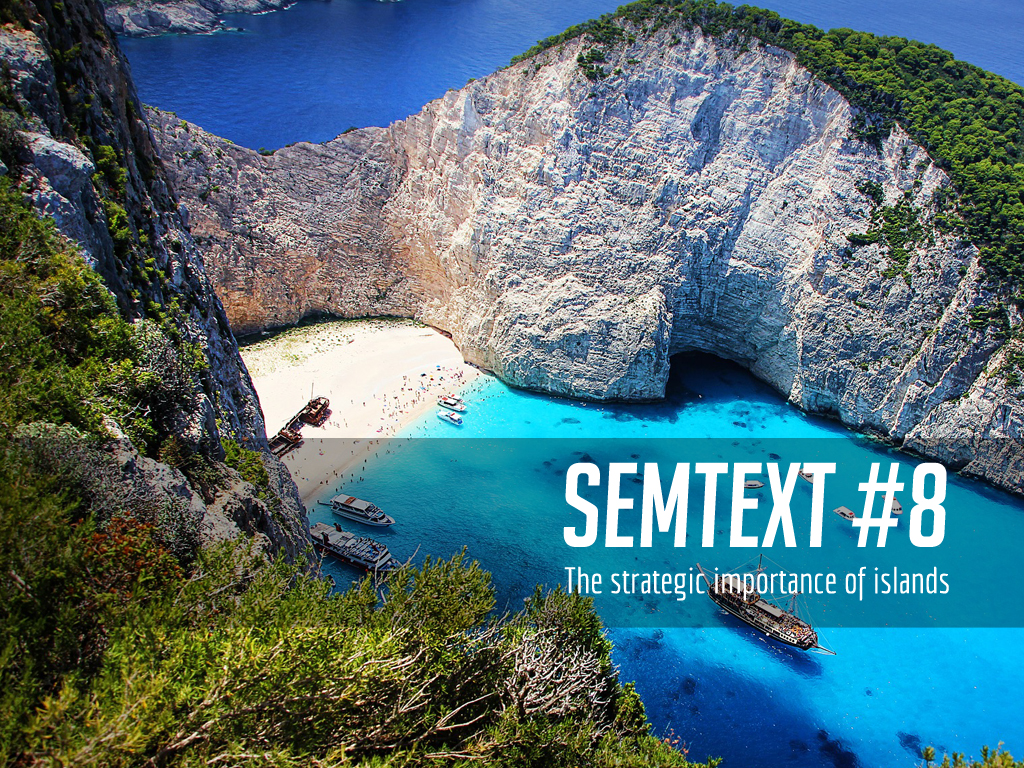 This SemText summarises Geoffrey Till’s talk at CSIS Jakarta regarding the strategic uses and importance of islands in Southeast Asian maritime security.

Since 2013, China had embarked on a mission to create artificial islands in the South China Sea. In their view, these islands are markers of sovereignty; they mark Chinese influence over the maritime expanse of the South China Sea. Based on satellite data compiled by CSIS AMTI, many of these islands are already equipped with military installations.

So, one question that could be asked: What’s up with islands? That is what Professor Geoffrey Till addresses in his lecture. I took the liberty of adding some points to his explanation, as he typically delivers his lectures in a very general manner.

Simply put, there are two main parts of the lecture. First, he talked about the geographic importance of islands and how they contribute to maritime power. Second, he focuses on the emergence of new technologies and how this encourages a shift from “open ocean” operations to the littoral. This is supplemented with a review of trends in naval development in the Indo-Pacific, though it wasn’t too in-depth.

Professor Till starts off with discussing the geographic importance of islands. He notes that islands are “fixed” geographic features that often are the mercy of “changing” drivers of foreign policy and strategy. Simply put, islands don’t mean much by themselves. They are given importance when strategy requires it. For example, back when ships ran on coal, coaling stations were necessary to maintain the speed of the navy. This necessitated the establishment of coaling stations on strategically-located islands such as Ascension Island and Singapore. As ships shifted to oil (and some, nuclear), these coaling stations—and the strategic value of the islands on which they were built—were rendered almost irrelevant.

Second, they can serve as indicators of performance and sovereignty. Despite being isolated or even lacking in any form of resources, islands serve to mark the extent of a state’s sovereignty. The Falkland Islands, for example, aren’t entirely fertile and mostly home to sheep farms, but it was an important marker of British sovereignty. The same logic could be applied to the islands of We and Sabang. Both mark the easternmost and westernmost points of Indonesia respectively.

Third, islands can serve as strategic enablers. Islands in the Pacific were coveted as military bases by the Americans, which then enabled MacArthur’s “island-hopping” strategy in the Second World War. The same islands were used by the Japanese to cement control over the Pacific.

While islands serve many strategic benefits, they may also become liabilities, especially when left vulnerable. Till draws upon the example of Singapore. Being far from the center of power, its defense wasn’t exactly Britain’s highest priority. When the Japanese claimed the island in 1942, it practically ended Britain’s control in maritime Southeast Asia.

The shift from “open ocean” to the “littoral” and “archipelagic thinking”

Till then notes a trend where navies shift from “open ocean” operations. referring to the need for high-endurance and heavily-armed battleships capable of sailing in blue waters, towards a more “littoral” approach (for the uninitiated, refer to Littoral Operations in a Contested Environment [PDF]). Suffice it to say that islands are cool again, and this is actually reflected in strategic thinking throughout the Indo-Pacific.

China has been preoccupied with islands since 2013. The preoccupation is attributed to a “revolutionary” change in the Chinese strategic thinking (Keck says its “Mahan with Chinese characteristics”). The Two Island Chains (pictured below) is often considered China’s endgame strategy in maritime Southeast Asia. It is a way to substantially deny the United States and other parties from operating in the waters. At the same time, it allows China to project power from the mainland.

If China’s maritime strategy is expansive, Japan’s obsession with islands could be a result of its continued encounters with China in the disputed Liancourt Rocks. A quick survey of the annual Defense of Japan shows that in around 2015, the “defense of remote islands” began to pop up as a defense priority (in the same year, plans to bolster these defense also started to kick off).

On part of the United States and their allies, Till notes a shift towards “integrated joint operations” and a sort of “archipelagic thinking”. He didn’t go in-depth on these terms. In short, “archipelagic thinking” here refers to the renewed strategic importance of islands in maritime strategy, a way of thinking that necessitates a mobile and joint naval force consisting of high-endurance ships and naval air power.

He did touch upon emerging technologies, such as unmanned underwater vessels and advanced sensors, which would further enable the implementation of “archipelagic thinking”. Aside from emerging technologies, he noted Australian efforts to extend their presence in the Pacific Islands as a means to balance Chinese presence (also by bolstering naval capabilities).

Till ended his brief lecture by suggesting that good order at sea should always be maintained. While islands may be a reason for conflict (e.g. in terms of territory), there are also other incentives to cooperate when it comes to islands. Global warming, for example, is a strong enough reason to emphasize cooperation in protecting islands, as these islands would be first affected by the rising sea tides.

Seminar: The Strategic Importance of Islands