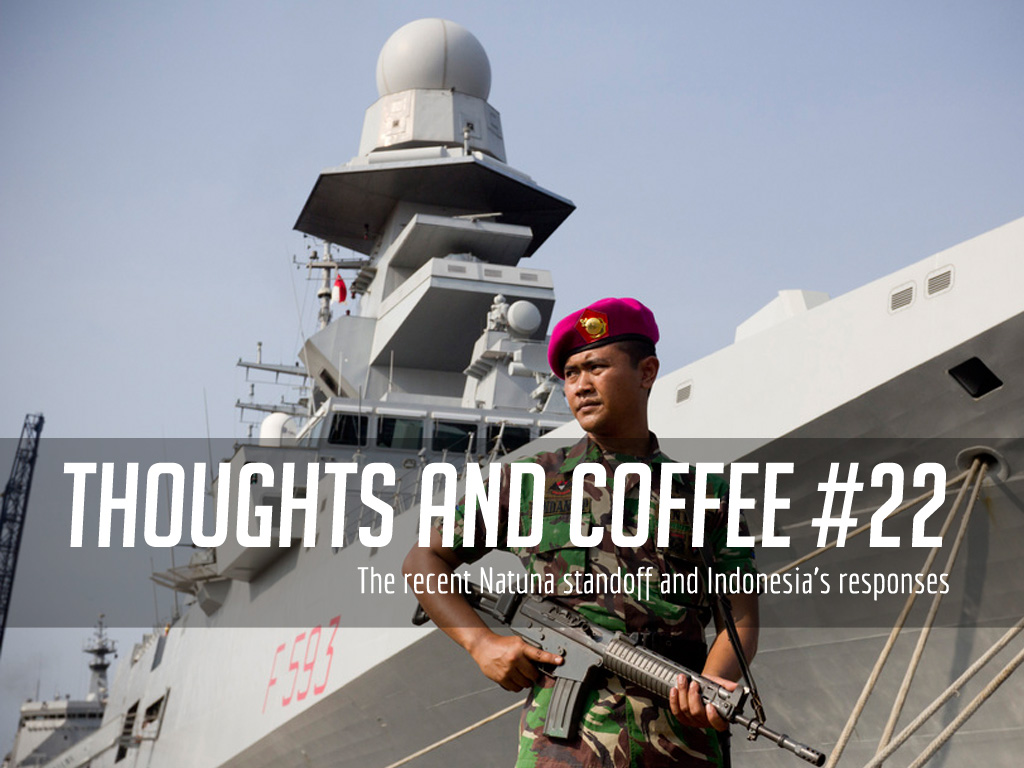 The year 2020 kicked off with a major bang. The United States assassinated General Soleimani, bringing the two countries closer to the brink of war. In the Southern hemisphere, Australia’s bush fires continue to blaze and Jakarta experienced its worst flood in decades. At sea, however, is where tensions are more evident, particularly between Indonesia and China.

Since 19 December 2019, 65 Chinese fishing vessels have trespassed into Indonesia’s Exclusive Economic Zone off the Natuna islands. The Natunas are located just outside of China’s Nine-Dash Line (9DL for short). Though Indonesia is not an official claimant in the South China Sea dispute, the Natunas EEZ proximity with the 9DL makes it easy for Chinese fishing and Coast Guard vessels to trespass.

This is not the first time Chinese vessels have encroached Indonesia’s EEZ. Three similar incidents occurred in 2016 in March, May, and June respectively. The Indonesian Ministry of Foreign Affairs lodged a formal diplomatic note in response to the March incident. The June incident involved hot pursuit and warning shots by the Indonesian Navy, which prompted a stern response from China.

Following the recent incursions, the Foreign Ministries of Indonesia and China started issuing statements. The official response from the Indonesian Foreign Ministry confirmed the EEZ violations, reaffirmed the absence of overlapping maritime claims between Indonesia and China, and rejected the 9DL as it does not adhere to the principles of UNCLOS. In response, the Chinese Foreign Ministry invoked its “historical fishing rights” in the South China Sea and insisted that its Coast Guard were simply carrying out their constabulary duty of protecting China’s fishing rights. The statement ended with a call for dispute resolution through bilateral dialogue and to maintain friendly cooperation. In another instance, the Chinese Foreign Ministry has also rejected the 2016 PCA ruling, calling it “illegal, null, and void”.

While the Indonesian Foreign Ministry has demonstrated a strong stance against China’s action, the same cannot be said of other ministries. Most notable were responses (or lack thereof) from the Defence Ministry (Kemhan) and Coordinating Ministry for Maritime Affairs and Investment (Marves). Prabowo Subianto, the incumbent Defence Minister, said that China was a “friend” (sahabat) and that the dispute ought to be resolved nicely. His stance is in stark contrast compared to his campaign rhetoric in which he promised to be “harsh” on parties that “steal our natural resources”.

Luhut Binsar Pandjaitan of the Marves insists that Indonesia has always rejected China’s claim over the EEZ, but he also wanted the problem to “not be escalated” (tidak perlu dibesar-besarkan). Luhut’s cordial, if not indifferent, attitude here may likely be due to his official capacity as the head of Marves, which is tasked with promoting foreign investment. It would not do Luhut well to overly antagonize China, considering their large flow of investment into Indonesia. However, Luhut later hinted at a proposal to acquire a frigate in order to increase Indonesia’s naval firepower in Natuna.

Another key ministry that has also been relatively mute on the issue is ironically one of the forefront fighters in the war against illegal fishing, the Fisheries and Maritime Affairs Ministry. Instead of addressing Chinese encroachment in the Natunas, Edhy Prabowo seems to shift the focus to Vietnamese fishing vessels. When asked his stance on China, he repeats Prabowo Subianto’s “we should remain cool” stance. In contrast, former Fisheries Minister, Susi Pudjiastuti, has overtly defied China’s illegal incursions, stating that what their fishing vessels are doing is a form of “transnational organized crime”.

There were also other responses from the Natuna regent, who requested upgrading the administrative status of the Natuna from a district to a province, claiming that it will allow local government to better address the presence of the Chinese Coast Guard. The Indonesian Navy and Bakamla have also responded by increasing presence and conducting aerial reconnaissance in the waters, though it seems Chinese vessels insist on remaining.

Where is Jokowi in all of this? After gathering his ministers for a limited meeting, he reiterated Indonesia’s rejection of the 9DL and emphasized “no compromise” over Indonesia’s territory.

The Maritime Law Enforcement Scene: More Actors in the Mix?

I have argued elsewhere that one of the main problems of Indonesia’s maritime security scene is the sheer multiplicity of actors with often overlapping authorities and tasks. However, it would seem that streamlining the scene isn’t a priority for this administration. Mahfud MD, the Coordinating Minister for Political, Legal, and Security Affairs, mentioned of a mobilization of 120 fishers from Java to the Natunas. To the fishers he said, “You will, in addition to exercising your rights as citizens, also make good on your duty to help defend the country, to show that these waters are ours,” Perhaps Mahfud may be contemplating the creation of an Indonesian version of a “maritime militia”, however, there is still much speculation around this move. If a maritime militia were to be established, it would further add to the complex network of maritime law enforcement actors in Indonesia.

On the military side, the Indonesian military recently inaugurated a Maritime Information Center. The Center answers to the TNI Commander, Hadi Tjahjanto, who claims the Center would play an important role in enhancing maritime governance through information sharing. The establishment of the Center, particularly by the military, is at odds with the function of the Bakamla. Under Presidential Regulation no. 178/2014, Art. 3 (d), Bakamla should be the one carrying out “synergy and monitoring” functions. It is unclear how the Center will operate.

The fragmented responses over China’s behavior has often been cited as the underlying reason for a lack of a coherent strategy in the South China Sea. This has been a focal point in Syailendra’s paper, who calls it a “non-balancing act” [paywall]. Unless ministries/agencies can come together with a unified stance, perhaps something groundbreaking could happen. However, as it stands, a unified voice is difficult to find due to the varying interests across the ministries. Furthermore, as Evan Laksmana puts it, Indonesia would also need to add more diversity to its “international law-heavy” toolkit.