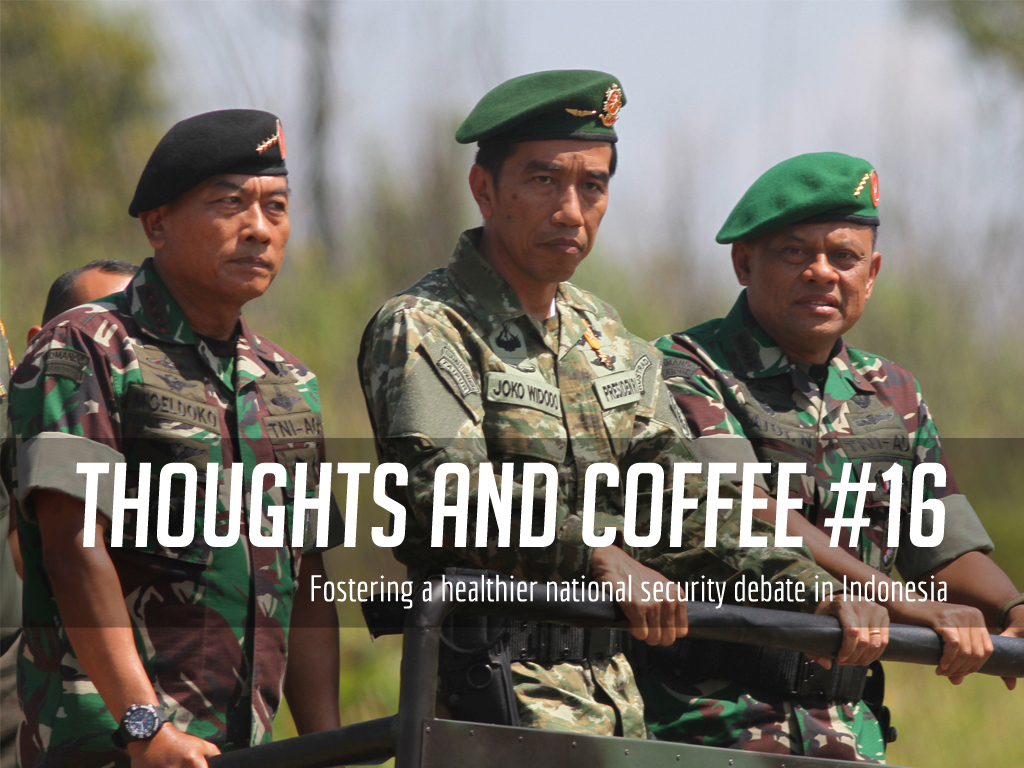 The military needs to loosen their grasp on information so everyone is on the same page in the national security debate.

The Jakarta Post ran the following headline, “Indonesian Air Force to fly jet fighters to wake people for ‘sahur’”. This isn’t the first time JP has ran such a loaded headline, but this particular one is amusing as it ignited a short scuffle on Twitter between a national security academic and the official Twitter account of the Indonesian Armed Forces.

The academic criticized the morning routines as a waste of operational funds. The Air Force replied with a long thread on how the morning exercises were conducted to accommodate a change in operational schedules due to Ramadan. At the end, the academic apologized for making a hasty observation and chivalrously accepted the explanation from the Air Force (and other accounts). He defended his initial statement as being based on “incomplete public information”. However, this did not stop other accounts from piling on the academic, berating them for “speaking out of turn” and how they should use their knowledge to “build the country” instead of “creating fear”.

The following embedded tweet is a reply from an Air Force personnel, which, according to some, effectively “schooled” the PhD candidate in question.

This other tweet, by the official account of the Indonesian Air Force, delivers a zinger. “The admin isn’t a PhD candidate, yet understands the exercise’s utility in maintaining aerial performance”.

As a so-called “security scholar in training”, I too have chimed in on national security issues, such as military reform, civil-military relations, and defence systems acquisition. My first attempt at chiming in, as shown in this piece where I criticized the acquisition of submarines, was met with a lot of hostility, especially in military (both enthusiasts and official) forums. I even heard, through a colleague, that I was accused of being an “agent of influence” for foreign powers, that my nationality had been “compromised”. Even though I do stand by some of the arguments made in the commentary, the response to my criticism was not a constructive dialogue. This is what we’re missing in a healthy national security debate.

In this post, let me chime in on the state of the national security debate. As I see it, the landscape is still dominated by pro-military nationalists and the military themselves, and leaves little room for academics (except those whose views are readily accepted by the defense establishment). If we want to have a healthier and more informed national security debate, I propose the military has to lessen their control over information related to national security. Of course, I do not advocate for entire declassification of information; some secrets may be kept, but a large portion should be distributed openly, in accordance to operational standards. The point is, a healthy debate cannot occur if one side continues to hog all the relevant information and use it to parade over others who wish to contribute to the debate.

I first address the growing rift between national security practitioners and academics. The glaringly obvious problem that separates academics and practitioners is information accessibility. Apart from public documents, such as legislation, the defense budget, declassified acquisition plans, and lip-service Defense White Papers, a large portion of information related to national security is cautiously guarded by practitioners. I do not wish to discuss the utility of secrecy; obviously, a degree of secrecy is necessary for the functioning of an effective defense establishment. But what I would like to point out is that specific documents, especially those outlining military thought or operational procedures, are largely closed off to the public. Even if one has access, it requires a degree of privilege, which I’ll return to later.

To illustrate this in the recent Twitter argument, the Air Force account then reveals the operational considerations of moving the exercise to the crack of dawn. They do so in a way that positions themselves in a place of more knowledge, perhaps in an attempt to flex over the supposedly smart PhD candidate. However, in all fairness, the PhD candidate relied on public information available through the Jakarta Post, which became the basis of their opinion on how it is a waste of operational funds; whereas, the Air Force account had insider knowledge.

Anecdotal evidence incoming. A student of mine researched the Indonesian Navy’s response to piracy and found a discrepancy between numbers from the International Maritime Bureau (which listed near-zero incidents of piracy in the Malacca Strait) and the Navy’s numbers (which, according to a statement from a high-ranking official, was in the hundreds). The Navy, however, refused to disclose their data and methodology, and in a bizarre twist, suggested that the International Maritime Bureau was fabricating data. My student cross-examined the IMB data with ReCAAP data and found they report similar figures.

Now, you may think that this is obvious. Information asymmetry is inevitable. We cannot expect the media to have a full grasp on the reasoning behind these things. However, if this persists, how can security practitioners stay on the same page as academics?

Going back to the issue of information accessibility, I have had my fair share of trying to understand how the military establishment is supposed to work. It is difficult, however, to gain insight into their operational procedures. Take the United States military, for example. Their Field Manuals sufficiently describe a wide variety of security contingencies and their respective operating procedures. If any Field Manuals exist for the Indonesian military, they are largely kept far away from the public. The rationale is often that they are military secrets, which I respect, but at the same time, how are we supposed to hold the military accountable if it turns out they cling on to an outdated understanding of counterinsurgency? Debating, clarifying, and revising these operational concepts is what national security academics do, and the military can surely benefit from this constructive dialogue.

If we want to see a healthier national security debate, perhaps it is time for the military and other practitioners to stop working against their critics and work with them. They need to relax their stance on operational secrecy and make public their documents on operational procedure (within reason, of course), data-sets, and threat assessment, so everyone can operate on the same playing field. If this doesn’t happen, the national security debate will continue to be dominated by the military and the “strategic rut” will continue.

One thought on “Fostering a healthier national security debate in Indonesia”