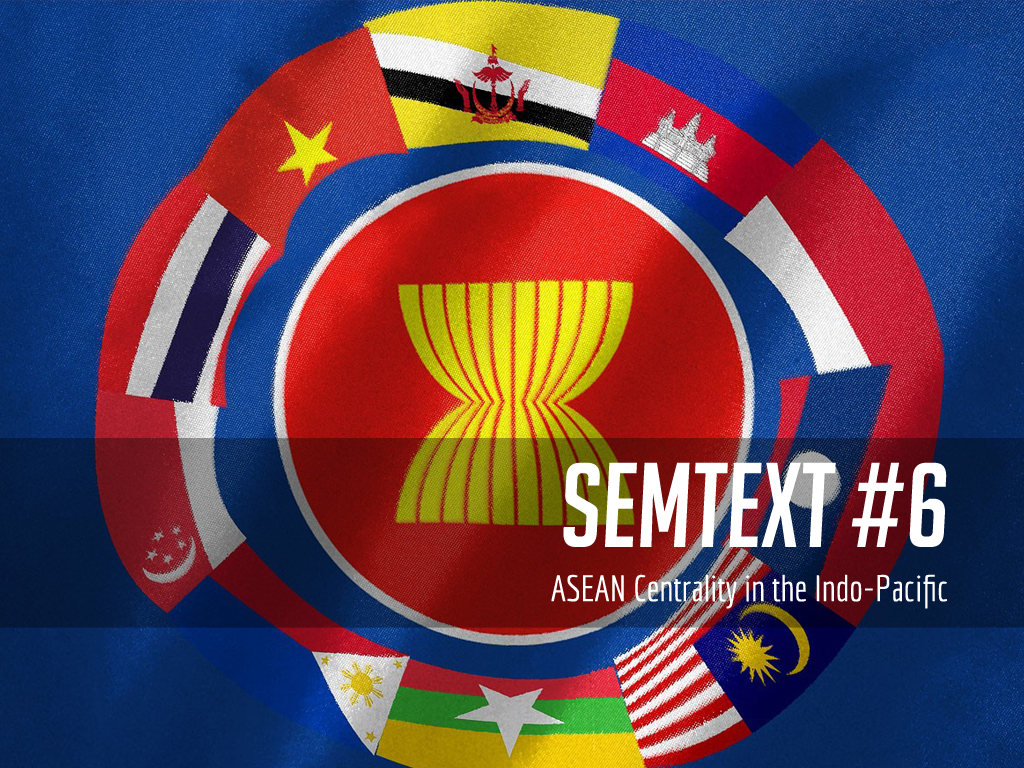 This post is a collection of notes from four speakers regarding ASEAN centrality in the Indo-Pacific.

The term “Indo-Pacific” has re-emerged in IR discourse as an alternative term for “Asia-Pacific”. However, it has been around since 2005, but only now has it become popular again since President Trump repeated it over and over again in his 2017 tour of Asia. This hints at a renewed US interest in Asia, which is likely due to China’s assertive behavior in both the Pacific and Indian Ocean Rim.

So, what is the Indo-Pacific? Is it simply another catchy buzzword or is it a real geopolitical construct that’s here to stay? If it’s here to stay, what’s the underlying narrative? Is it meant to denote an “inclusive” area where the interests of all countries within its scope are represented, or is it meant to represent the exclusive interests of a group of big guys? Does ASEAN have a say in this?

Present to speak were Prof. Raja Mohan from the Institute of South Asian Studies, Ridwan Djamaluddin from the Coordinating Ministry of Maritime Affairs, Dr. Evi Fitriani from the University of Indonesia, and Endy Bayuni, former chief editor of the Jakarta Post. I’ll write their main talking points, along with my commentary afterwards.

Just a quick note: I left my notebook at the seminar venue (stupid me), so I have to rely on memory and a bad recording of the talks. I should really invest in a proper voice recorder instead of relying on my phone.

You can also download some of the speaker’s PowerPoints here!

“Is there a way for ASEAN to translate its geographic centrality into institutional centrality?”

Prof Mohan began his talk with an overview of what the Indo-Pacific concept means. He does this by providing a short history of the construction of the Indo-Pacific, noting that the concept of Southeast Asia only started to exist in World War 2. He then continued on about ASEAN’s role in shaping the Indo-Pacific, but only if ASEAN was willing to do the hard work of diffusing its set of norms beyond Southeast Asia and crafting a framework for Indo-Pacific unity. This would include being able to create a more robust multilateral framework that can accommodate the interests of the many countries in the Indo-Pacific. However, Prof Mohan also cautioned against relying on multilateralism too much. He argued that while multilateralism is indeed beneficial for the region, there ought to be serious discussion about a “framework for deterrence” to buttress norms. Prof Mohan hinted that Indonesia may be able to play a role in the construction of this framework considering its track record in Indo-Pacific multilateralism.

Perhaps the most interesting remark from Prof Mohan was his critique of hyped multilateralism. While multilateralism is indeed necessary, it is also imperative to establish a “framework for deterrence”. When I asked him to clarify his proposed “framework for deterrence” during the Q&A session, he said that the framework would be a mechanism to ensure norm enforcement. He took the example of the League of Nations, which had good ideas on paper, but lacked a definitive mechanism to punish those who violated the League’s norms. However, Prof Mohan wasn’t clear on how such a framework would look like. He alluded to maintaining a balance of power in the region, but how that will be operationalized without jeopardizing the premise of Indo-Pacific inclusiveness remains a question. Given the diversity (and I speak diversity not just in terms of differences in capabilities) of the states in the Indo-Pacific, it would be difficult (maybe near-impossible) to agree upon such a framework.

Regarding ASEAN and the Indo-Pacific, ASEAN could become a functional vehicle for Indo-Pacific multilateralism. This is, of course, provided that ASEAN is willing to engage in the grunt work of getting many states on the same page. However, ASEAN’s weakness is its aversion to legally-binding mechanisms. We have seen many “failures” of ASEAN (e.g. Rohingya genocide, South China Sea ruling) which have occurred due to an absence of a “framework for deterrence”.

So Prof Mohan’s question remains: how can ASEAN become the central institution in the Indo-Pacific?

Like Prof Mohan, Djamaluddin began his talk by highlighting the economic trends in the Indo-Pacific, such as economic growth, growth of the middle class, global energy demand, and maritime trade.

In one slide, he showed Indonesia’s concept of the Indo-Pacific which includes principles such as openness, inclusivity, transparency, respect for international laws, and ASEAN centrality. There were three focal points for cooperation, namely creating an enabling environment, addressing security challenges, and economic cooperation.

After this bit on Indonesia’s concept of the Indo-Pacific, he continued speaking about Indonesia’s maritime potential, which at this point includes a lot graphs so you might as well head over the link in the beginning and look at his PowerPoint. All of this boils down to Indonesia’s current policy agenda, the Global Maritime Fulcrum, and how these “sources of power” can be used to improve Indonesia’s centrality and achieve foreign policy goals.

As Deputy for Infrastructure, Djamaluddin spoke well within his scope of expertise. His highly visual presentation highlighted Indonesia’s economic and geographic strengths. The new information that he presented was helpful, especially regarding the development of maritime infrastructure in relation to the Global Maritime Fulcrum; however, it was rather off-tangent from the central issue at hand, which was ASEAN’s centrality. Instead of ASEAN centrality, Djamaluddin alluded to Indonesian centrality in the Indo-Pacific.

In his talk, Endy thinks that the changing dynamics in the Indo-Pacific are a test of Indonesia’s diplomatic skills. He first highlighted the attitude of ASEAN members and their varying degrees of commitment to the regional organization. This is exacerbated by differences in geographic position. He noted Indonesia is the only country that has a direct stake in the Indo-Pacific as it lies at the crossroads between both the Indian and Pacific Ocean; whereas others are located on either side. Furthermore, less well-off ASEAN members have fewer diplomatic resources to commit to more institutional initiatives.

Bayuni notes Indonesia has had a lot of diplomatic experience in the region, citing examples like the Asia-Africa Conference, the Non-Aligned Movement, and sustaining ASEAN-led initiatives like the East Asia Summit, etc. With this experience, there are two available options for Indonesia. The first option includes Indonesia committing to use ASEAN as a platform to jumpstart its Indo-Pacific concept. Bayuni argues the ASEAN Way is a solid norm; it just needs time to diffuse across the system. To achieve this, Indonesia needs to exercise leadership in ASEAN. The second option involves Indonesia putting ASEAN on the sidelines and courting other initiatives such as the Quad and BRI.

In a similar vein with Djamaluddin, Bayuni hints at an increased role for Indonesian leadership in ASEAN. In other words, what constitutes ASEAN centrality here mostly sounds like Indonesian centrality.

Bayuni’s second proposal is indeed interesting. Thinking of ASEAN as a cornerstone of Indonesian foreign policy allows Indonesia the flexibility to navigate freely amidst the many regional initiatives present in the region. Surely, Indonesia could benefit from this flexibility, especially in a region that is being squeezed by great power politics. However, this may send a signal to ASEAN members that Indonesia, the de facto “father” of ASEAN, is becoming less invested in advancing regional integration. This may lead to a reluctance to cooperate from other ASEAN members, hence undermining all the hard work Indonesia has done in ASEAN. As the ancient proverb goes, “He who chases two rabbits, gets none”.

She first elaborates ASEAN centrality as being a combination of two features: integration and collective ownership of leadership. Integration here means ASEAN members should be able to speak with one voice and maintain a common position vis-a-vis external pressures. Collective ownership of leadership refers to the idea that ASEAN leadership ought not be the concern of a single member, but that it should be the concern of everyone. In other words, ASEAN members should feel that they all have a stake in leadership.

Second, she maintains that the concept of the Indo-Pacific is a construct to exclude China. This has been a common refrain, especially among Chinese scholars (see, for example, Pan (2014) [paywall]). She does not however, delve deeper into this ontological debate on the concept. She acknowledges existing great power pressure in the region and that ASEAN as an institution would need to be able to hold its ground due to its geographical centrality.

In the third part, she argues for the following.

First, ASEAN would need to push for its own brand of regional order vis-a-vis other multilateral initiatives proposed by the great powers. The U.S. are pushing for their interpretation of the Indo-Pacific, along with China, India, and Japan; ASEAN would also need a voice. She believes that in the East Asia Summit, ASEAN has already done this: it has pushed for an Indo-Pacific with ASEAN characteristics, namely inclusive, peaceful, and rules-based. This concept, she believes, is unlikely to be challenged by major powers.

Third, she emphasizes the importance of a sense of collective ownership of ASEAN leadership, which is a central element of ASEAN centrality. She uses the example of the EAS, which is expected to be used as a core platform for advancing ASEAN institutional centrality. However, she questions whether this approach would “survive”. EAS, she argues, has a different rationale. If Indonesia were to insist on using EAS like that, it would potentially jeopardize the sense of collective ownership.

Perhaps the most interesting point that Dr Fitriani brought up was the idea of “collective ownership”. It can be thought of an antithesis to what Djamaluddin hinted at and Bayuni explicitly stated in his presentation. Both speakers advocated for an increased Indonesian role in ASEAN, thus equating ASEAN centrality with Indonesian centrality. However, Fitriani seems to believe that this is a misguided approach. ASEAN can only be “central” in a sense that all of its member share an equal stake in its leadership. In this way, ASEAN can be said to be “central” because it is the first pick for multilateralism among its members. This would facilitate a sense of collective ownership that ASEAN does indeed care about equal development for all its members, rather than simply being a “tool” for the advancement of its more developed members.

Dr Fitriani’s other points mirror earlier speakers, particularly regarding the uncertainties in the Indo-Pacific region and the need for further ASEAN integration, so I don’t think I need to repeat them again.

Let me just summarize the main ideas of the four speakers:

As we have seen, ASEAN has a lot of potential in the Indo-Pacific. It remains to be seen, however, if ASEAN can use its potential to create an Indo-Pacific that reflects ASEAN values.

There are some interesting questions that can be researched further after listening to these speakers. First, what would a “framework of deterrence” look like for an organization that prides itself on non-interference? Would such a framework find common ground among the diverse members in the Indo-Pacific? Second, how can we convince ASEAN members to “collectively” own ASEAN? Of course, better communication and links are required to achieve this, but considering the stark differences in capabilities and resources, would ASEAN members be willing to subscribe to such an idea? Third, does ASEAN centrality always mean “Indonesian” centrality?

It looks like there’s a lot of work to do.

P.S. This seminar has been a very productive use of my time (and the free lunch was also tasty!).

Seminar: ASEAN Centrality in the Indo-Pacific