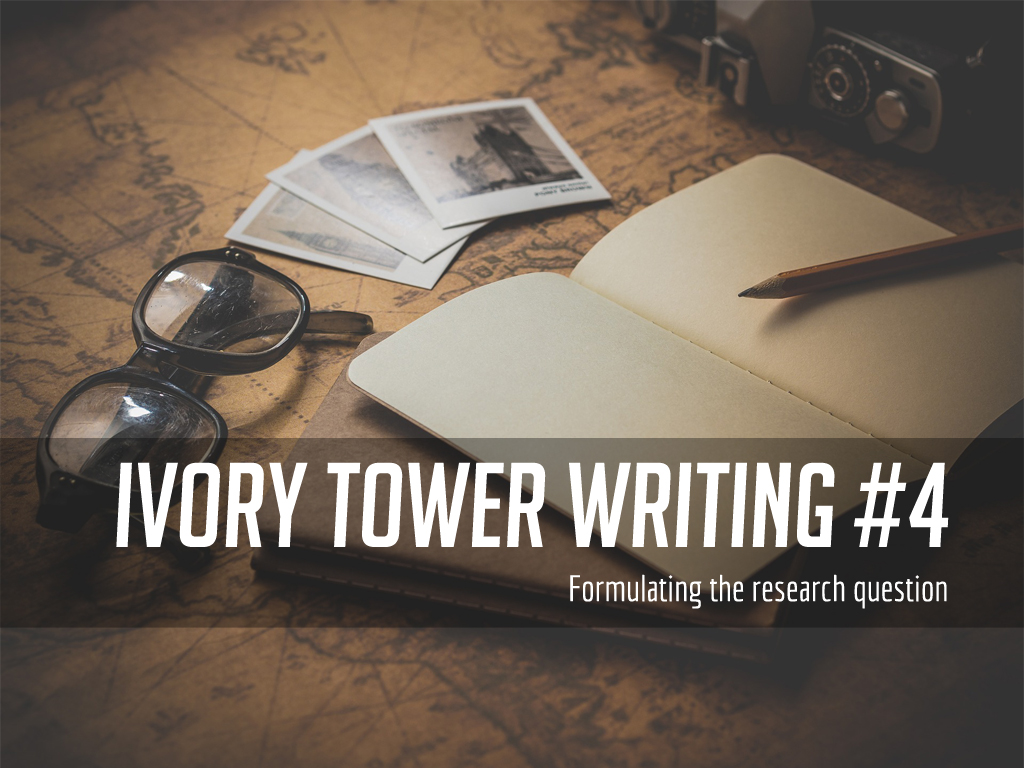 This post addresses the problem of the research question and how one may formulate it.

Ah, the research question. Perhaps one of the most dreadful parts of the pre-writing phase, yet the most important. You see, the research question is essentially your idea—which I assume you already have at this point—given physical form. Without it, your research will likely drag you all over the place, making you feel even more lost.

Why have a research question?

Let’s think of your idea first. It’s still in your head and you want to make sure that your reader (most likely your professor/journal editor/peer reviewer) understands how brilliant it is. You’ll need to communicate this idea in a meaningful way. In simple terms, the research question gives a clue to the readers what your research is about (and not about!). This way, if anyone wants to argue/agree with you, they’ll only need a single glance at the question to understand the gist of your paper.

If I’m looking for applied models of neoclassical realism, I may consider looking at articles where the main research question is “Did Hitler’s hubris cause Germany’s defeat in World War 2?”

As you may have seen from the example question above (which is a grossly short summary of the late Alistair Horne’s book, Hubris, by the way), you can instantly identify what the author is trying to prove e.g. the causal role of hubris in a military defeat. You may even be able to start guessing the methodology the author will likely use and their likely hypothesis (of course, you could also get this from reading the title).

Having a clear research question is actually more helpful for you than it is to readers.

The most important thing that a research question does is that it helps you stay on track. I can’t recall how many times I’ve had to read student papers that say one thing, but then venture off track mid-essay. They say that they want to examine the major points of dispute between Huntington’s objective civilian control thesis with Samuel Finer’s “Man on Horseback” thesis; the question being “What are the major disagreements between Huntington and Finer?” From here, you may expect a balanced discussion of both theories including a neutral assessment of their strengths and weaknesses, etc. However, the paper veers off into discussing WHY Huntington is better than Finer. Notice the difference?

Going further, having a clearly defined research question also allows you to set up the limits and scope of your research, which is extremely helpful for the reader. Using the above question again as an example, you may be able to immediately identify the author’s possible scope: they simply want to compare and contrast ideas. Anything else is irrelevant. The author is unlikely to provide a value judgment as to which theory is better than the other.

Finally, a clear research question helps you, the author, have a better idea on which theoretical framework/research method to use. We’ll get into this sometime later, but the analogy is like this: you don’t use a bread knife to cut a tenderloin steak. That’s being disrespectful to the animal that died for your pleasure.

How to formulate a research question

I don’t have a lot of tips to share when it comes to formulating research questions because, once again, it’s a very personal matter. However, there is one golden rule I usually follow: Be careful of the words you use.

I cannot emphasize this enough. The choice of words often influences the design of your entire paper. For example, compare the following research questions:

The first question suggests your research will seek reasons contributing to the failure of Operation Barbarossa. “There are many, which one is the most influential?” I’ll ask before browsing away to find another paper. The second question suggests you will try to apply Haas’ neo-functional theory to a case study of ASEAN and see whether it applies or not. But then, what particular variable within neo-functionalism are you trying to show?

These, of course, are still very vague research questions. You want to clearly mention the independent, intervening (if applicable), and dependent variables in your questions. Consider the following research question which I formulated based on Syailendra’s article regarding Indonesia’s response to China’s assertiveness [paywall]:

Does disagreement between key Indonesian domestic institutions contribute to a non-balancing response towards an assertive China?

Just from a glance, we have a clear idea of what Syailendra’s research will be about. He’s going to do the following:

You as the reader can then decide whether they want to read further or not. If you’re interested in Indonesian foreign policy, you may want to read the paper to the end and see whether Syailendra can muster a sophisticated argument. Or you could just continue browsing for another article. See how important a clearly-worded research question is?

Also, the answer to the above research question is “yes”.

It is highly unlikely that you’ll get your research question right the first time. Trust me, I’m struggling with it right now.

As Bob Hancke in Intelligent Research Design writes, formulating a research question is an iterative process. In non-fancy talk, it means that you will continuously tweak your research question as you engage with datasets, the literature, and maybe even other academics. This is a normal thing that you have to get used to. In many cases, your Research Question Mark I may look a lot different (and better!) once you reach the end of your research (cue Research Question Mk. XIII).

That’s all for formulating a research question. Feel free to share your own tips in the comments, and until next time in another Ivory Tower Writing post!