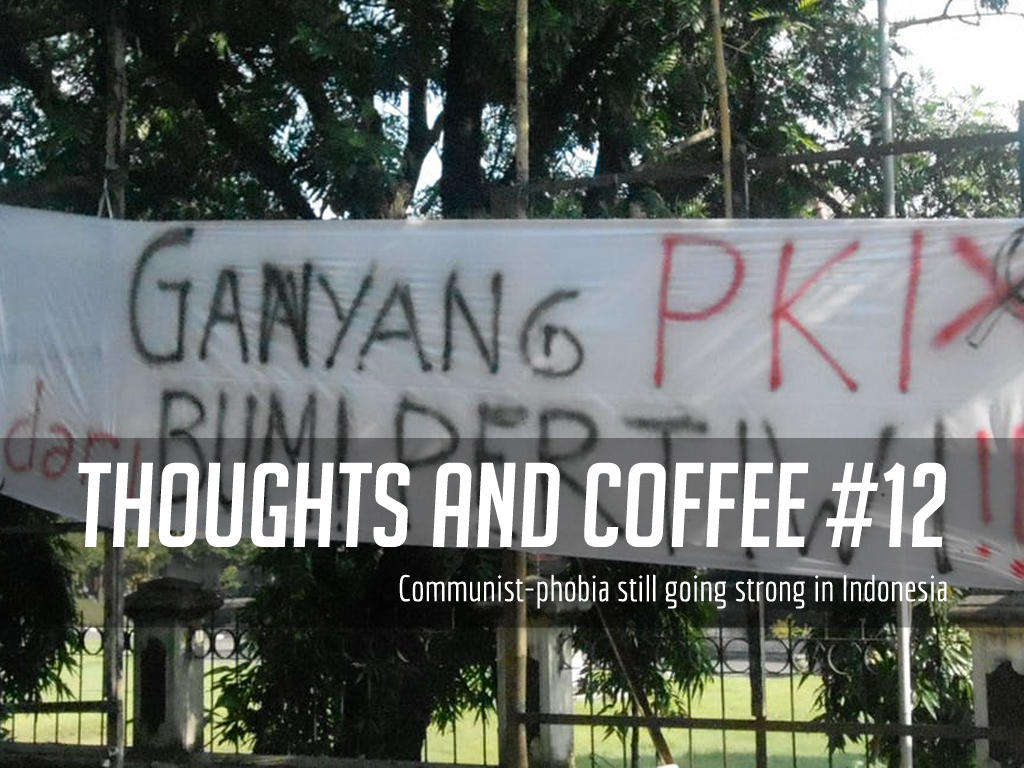 Time and time again, Indonesia has seen many political outbursts due to the inflated fear of the Red Spectre of Communism. The most recent outburst occurred at a Lembaga Bantuan Hukum (Legal Aid Institute) in Jakarta following a seminar discussing the 1965 Communist massacre. The office was surrounded by protestors, entrapping the participants inside the walls. Most of those participants were the elderly – survivors and witnesses to the bloody pogrom that marked an important watershed in Indonesian politics. It was not until the following day that participants were allowed to leave, but the damage had already been done.

Involved in this incident were anti-Communist groups and a number of right-wing organisations, such as Front Pembela Islam. This incident indicates the continued stigma of Communism in Indonesia, a result of decades of indoctrination during the New Order.

The LBH office suffered some physical damage; however, I believe we can agree that the damage to Indonesia’s budding democracy should take centre stage.

I may seem as a defender of the Marxist left. But, try to put politics aside for a moment and consider the larger picture. Regardless of political leaning or affiliation, it should be agreed that under no circumstances should a proper assembly be repressed, especially when the assembly is conducted for the sake of education. By allowing so-called anti-Communist groups to repress freedom of assembly and speech, Indonesia has taken one step backwards in safeguarding civil liberties.

The attack on the LBH shows that some groups continue to live in cognitive dissonance, induced by years of political indoctrination. Even when authorities found no evidence of PKI-related activities going on, the masses insisted on blockading the building and threatening the people locked inside. Furthermore, there is speculation that the mob were only capable of gathering quickly due to the use of messaging apps and social media. Messages calling for people to rally at the point were filled with dubious accusations, with one message claiming the “PKI song”, Genjer-genjer, had been heard.

This is a symptom of the political reality Indonesia is going through: an era of post-truth politics, where information is not filtered and processed through reason, but rather emotions and biases. Add politics into the mix and you have a sweet recipe for disaster. Mobilising the masses has never been easier, especially when one can simply shout “PKI!”

To address the issue of Communism, some parties have advocated resuming screenings of the notorious New Order propaganda film, “The Betrayal of G30S/PKI”. Even Jokowi chimed in, suggesting that the new film be “reformatted” to fit the tastes of millennials. This is in line with his earlier ‘zero tolerance’ rhetoric on Communism. TNI Commander Gatot Nurmantyo said that showing the movie would serve to educate Indonesians of a dark episode in Indonesian history. However, this is rather hard to believe, especially considering his remarks on Communism as a key threat in his newfound obsession with ‘proxy wars’. It is also unlikely that a majority of Indonesians would even consider thinking critically of the film.

I have advocated the need for a critical approach to our national history, especially regarding the hazy years of 1965-66. To this date, this stance has not changed. However, I do not see this being implemented anytime soon. The government has yet to issue formal apologies to victims and survivors of the 1965 pogrom. If the government cannot show that it means to make amends, it is doubtful the population will follow suit. Unless the government and large swaths of the population come to senses of the infectious bout of Communist-phobia coursing through the nation, we will continue to see rising incidents of repressive mob justice masquerading as acts of ‘clobbering’ Communism.