This post discusses the role of networks and social groups in the radicalisation process.

A couple of weeks ago, I had the privilege to attend a screening of Noor Huda Ismail’s latest documentary, Jihad Selfie. He documented the life of 17-year old Aceh boy, Akbar, who got a scholarship to study in Turkey and was inspired to join ISIS, highlighting the role of the internet and social media in expediting the recruitment process. It did open my eyes to the infinite potential of social networks as a pathway towards radicalisation.

Before we get to discussing the role of networks, it seems appropriate to revisit the cultural explanation of radicalisation, since it ties in nicely with the construction of social groups. Social groups are bound together by a specific culture, but what exactly are the conditions that make a culture enable radicalisation?

In a chapter titled Cultural preconditions for potential terrorist groups, terrorism, and societal change in the edited volume “Understanding Terrorism: Psychosocial Roots, Consequences, and Interventions“, Moghaddam argues that there are several cultural preconditions that increase the probability of an individual becoming more radicalised. It should be wise to remember that a cultural explanation does not provide a definite certainty of a person becoming an extremist. In The Caged Virgin, as I have reviewed previously, Ayaan Hirsi Ali’s sister did not choose the same path as her — she instead chose to retreat back into her initial culture, while Hirsi Ali chose to become an “apostate”.

I now see how important upbringing is, not only because that is how one’s life starts but also in Islamic culture that is how the cage is built. Psychological conditioning is very powerful, and it takes great energy and force of mind and will to break out of it. – Ayaan Hirsi Ali, The Caged Virgin, p. 23

Moghaddam outlines 11 different preconditions that may exist in a culture which may lead to a higher risk of radicalisation. These conditions are separated for the sake of analytical clarity, however, it is important to remember that they may overlap and interlink with one another. We can’t simply pin down 1 precondition and assert that it alone is the sole cause of radicalisation. Furthermore, the presence of these preconditions only increase the probability, not make radicalisation a complete certainty.

The role of networks: bridging the community

Now, for an individual to become radicalised and be a part of a terrorist group, they need to be introduced to the “community” of fellow extremists and adopt the extremist’s cultural traits.

Marc Sageman, in Understanding Terror Networks, argues that the way jihadists use and construct their social network are important in understanding radicalisation and terrorism.

A terrorist network is usually constructed of nodes and hubs. In the illustration below, the red dot signifies a hub, which is basically a collection of smaller individual nodes. If we were to think of ISIS Central as a big hub, its wilayat represent smaller, regional hubs, and the smaller groups in mosques or their bases are smaller nodes. 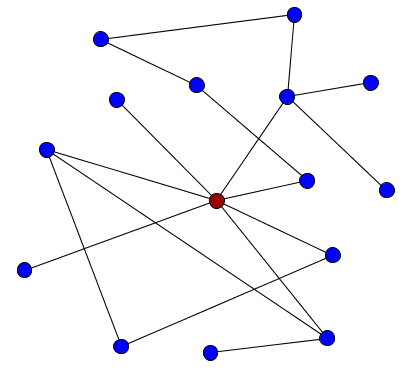 At the lowest level, a node can represent a “clique”, which are usually built upon common similarities among its members. These cliques are localised, usually small, and the members share long-term bonds. An estimate of a clique’s size is usually 5-10, based on Dunbar’s number.

The clique provides a means to construct one’s social identity, since it allows the development of intimate relationships and strong emotional feelings. It helps build in-group love and often, out-group hate. Often, acts of terror aren’t carried out for religious reasons, but for the sake of defending the in-group. This is further expounded in Sageman’s follow-up book, Leaderless Jihad, where he outlines four overlapping “prongs of radicalisation” that provide fuel for radicalisation within communities that have yet to be connected to the “struggle” of extremist groups. These include:

When a person, who may be suffering from what Moghaddam in From the Terrorists’ Point of View calls the “good copy” problem, they may be inclined to join cliques that provide a sense of worthy identity. It may also be the case that a person joins a clique and begins to adopt their ideas and habits. Since the clique provides a means to discuss issues and ideas, it is likely that the person may absorb and then adopt the clique’s stance on such issues, such as the global jihad. Experiencing, either directly or indirectly, the Islamic struggle of their fellow “brothers” in Syria primes the individual (and the clique), making it easier for recruiters to mobilise these people and connect them to the Islamic community.

This is the basic premise of Noor Huda Ismail’s documentary. In Jihad Selfie, Noor Huda also examines the role of the internet in expediting the formation of the connection between the individual and the larger jihadi community. Akbar was influenced by his friends’ posts on social media. The “coolness” of them in battle fatigues attracted Akbar, who then began to connect with ISIS recruiters.

This was also discussed by Sageman in Leaderless Jihad. The internet is a powerful networking tool that increases the mode and scale of participation. What was once an isolated study group in a university mosque may virtually develop into an international discussion group, where members can share their experiences and contribute to the overall meta-narrative. Sageman differentiates between “passive” and “active” modes of the internet. He argues that simply reading the accounts posted on a “passive website” (think of a company website)

Sageman differentiates between “passive” and “active” modes of the internet. He argues that simply reading the accounts posted on a “passive website” (think of a company website) only serves to reinforce already made-up minds. Instead, what actively drives radicalisation is the engagement conducted by experienced terrorists with the laypeople in secret chat groups or even forums. People are easier to persuade if they think they’re actually being involved in the conversation with a human being rather than reading whatever ISIS posts in Dabiq. It is also easy to join in these conversations; you simply need an internet connection and a laptop. It is also difficult for authorities to track down these conversations, especially when they chat in encrypted messenger software.

We have also seen how networks are an indispensable tool for the recruitment process, and how the internet has helped expedite the process. It is basically about making bridges between an individual and a larger community to foster a sense of in-group love and, unfortunately, out-group hate.