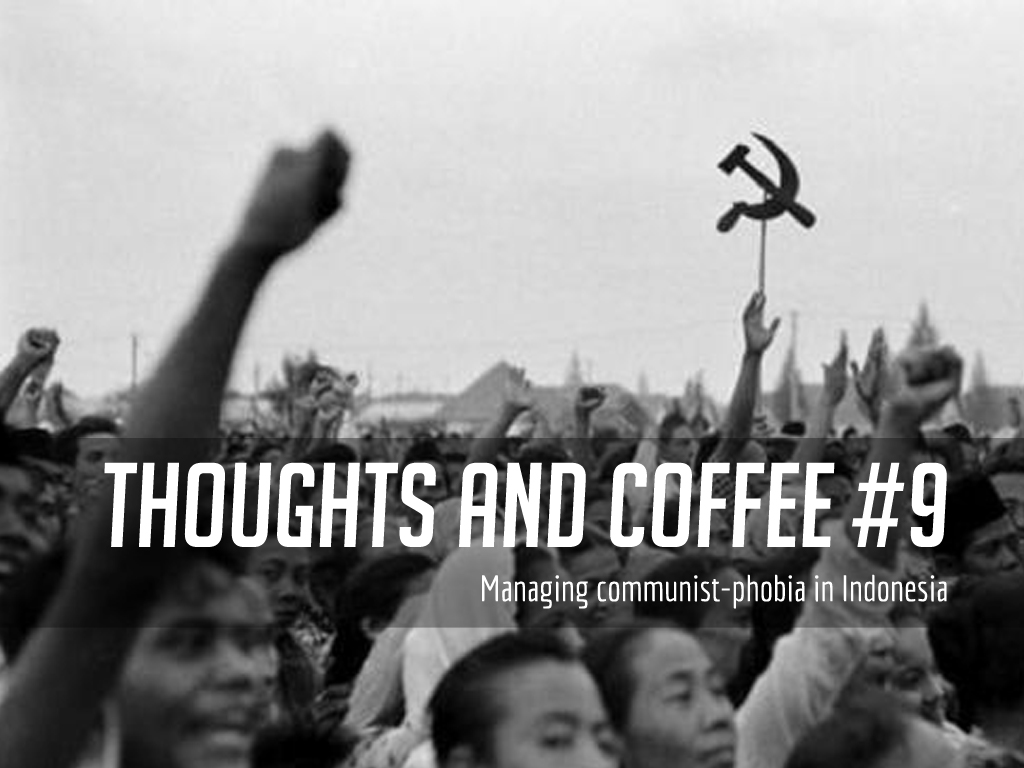 A specter is haunting Indonesia – the specter of communism. Everyone’s freaking out about it, despite the Indonesian Communist Party (PKI) having been banned for almost 50 years now.

The beginning line of Karl Marx and Friedrich Engels’ Communist Manifesto bears a striking resemblance to Indonesia’s current socio-political situation, in which communism has once again been resurrected as the surreptitious bogeyman aiming to usurp the throne of today’s government.

The recent surge of communist-phobia can be traced to the 2014 presidential election. In a libelous pamphlet entitled Obor Rakyat, Jokowi was framed as a member of the PKI. Since then, labeling someone as antek PKI (related to the PKI), such as Kivlan Zen’s accusation toward Budiman Sudjatmiko and Benedict Anderson, has become more common.

This new-found phobia has had multiple agencies starting witch hunts to find alleged symbols of a potential communist resurrection. The Indonesian Military (TNI) has cracked down on people selling and wearing T-shirts bearing the hammer-and-sickle logo. Bank Indonesia had to issue a clarification regarding its signature rectoverso logo on bank notes, which some parties claimed was similar to the communist logo (surely Marx would be turning in his grave).

Either in jest or seriousness, an Islamic cleric tweeted about the Alexis Hotel, claiming that its exterior façade could be read as “PKI”. Even the military continues to push the narrative that the PKI still exists and represents a latent threat to the country, which is used to justify the controversial bela negara program and TNI commander Gen. Gatot Nurmantyo’s “proxy war” agenda.

How did communist-phobia spread?
One interesting aspect to consider in the spread of this communist-phobia is the role of the “marketplace of ideas” in propelling its spread. The egalitarian nature of the internet has allowed people from all walks of life to participate in discussing and spreading information.

This allows free debate of ideas, with equal exposure to both sides of the argument.

In the marketplace of ideas, it is expected that equal exposure to debate on communism, the PKI and its role in Indonesian socio-political history will foster greater understanding in the layperson. However, as Cass Sunstein in On Rumors ( 2014 ) argued, the marketplace does not always work because we, as humans, have a tendency to give in to biases and groupthink, which are amplified on social media. A person who has previously held a belief (e.g. “Communism is bad”) will tend to group with those who share similar beliefs and be more defensive when presented with an opposing opinion. This is what Sunstein calls “polarization”. Sunstein also argues that “informational cascades”, which are easily formed through social media, encourage people to believe in things that the crowd already believes in.

As Nazi leader Adolf Hitler wrote in Mein Kampf: “If you repeat a lie often enough, people will believe it, and you will even come to believe it yourself.”

Communist-phobia is propagated by iconic figures who are influential with their followers. Their followers then participate in the information cascade through spreading and sharing content from the figure. Unfortunately, there aren’t enough “counter-narratives” that are capable of reaching an equal audience. This is further exacerbated by the formation of echo chambers facilitated by the “block” or “mute” button. Once someone becomes entrenched, it would require tremendous force to dislodge them. In the process, we may end up further galvanizing their beliefs.

How do we manage communist-phobia?
A practical measure would be to counter the narrative through the mechanisms of the marketplace of ideas. If there is one loud voice spreading communist-phobia, there should be an equally loud voice debunking communist-phobia. While this may not have an immediate effect, it is expected to gradually build up into a larger force that could bring equilibrium to the marketplace. In other words, it is an endless battle of words. We are starting to see such resistance in the United States, with alternative Twitter accounts being set up to counter President Donald Trump’s denial of science.

At the systemic level, however, I risk restating an oft-repeated solution: education. That being said, it is the only method that excels in the long run if we were to fully equip citizens with the faculties needed to separate fact from fiction. It is especially important in this post-truth world that we live in right now, where “alternative facts” exist and biases are more prevalent in guiding discussion.

A critical approach to history is desperately needed. Our school textbooks need to be rewritten not to reflect old biases and New Order narratives. Growing up in Indonesia, I was fed constantly with the idea that the PKI was evil and atrocious. It was not until I was exposed to critical interpretations of Indonesian history that I began to question the official version presented to me as a child. Communism is that “monster in the closet” that we feared as children because we didn’t know its true nature.

There is no easy and fool-proof way to combat communist-phobia. It requires a concerted and concentrated effort on all parts of the country. We need not be worried of the latent danger of communism; we should be more wary of parties trying to conjure a bogeyman to divert our attention from their ulterior intentions.