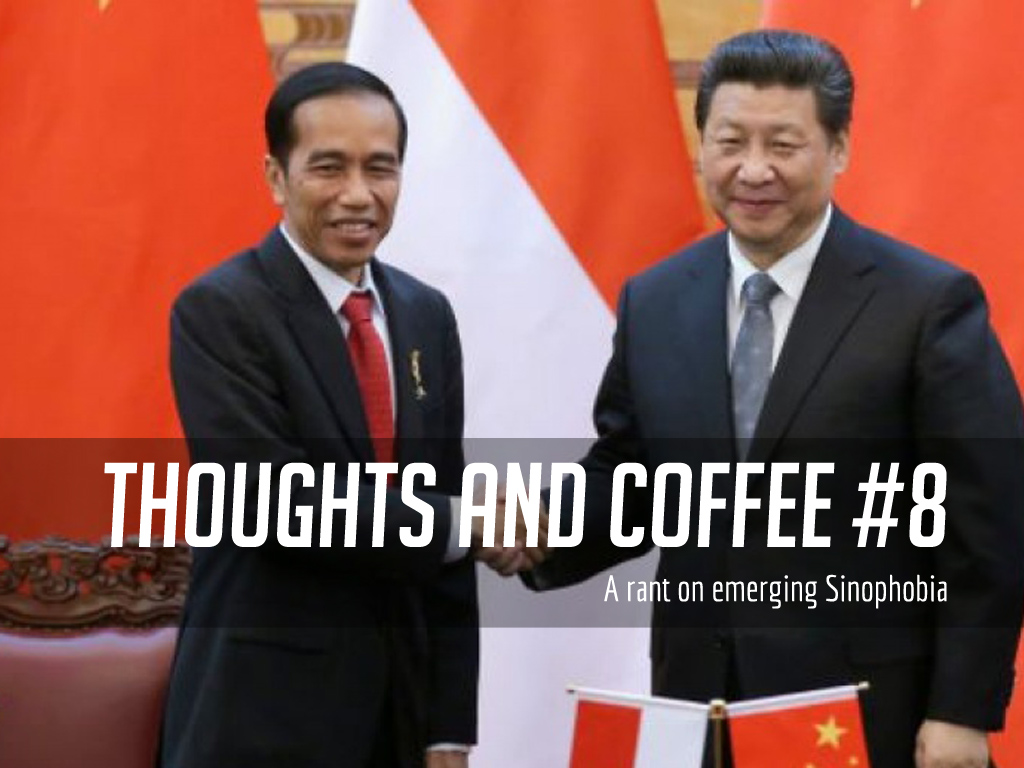 Unity in diversity. Unless you’re ethnic Chinese and non-Muslim.

A sobering quote written by a colleague of mine, Rocky, in a commentary regarding the recent rise of Sinophobia in Indonesia.

While 2016 was indeed a horrible year (which reached peak horribleness with the death of Harambe and President-elect Trump), for me, Sinophobia was a top highlight for Indonesia. Somehow, a select group of extreme Indonesians suddenly decided that Sinophobia was cool again. How did that happen and why should we care? To answer the latter part of my self-imposed question, unbridled Sinophobia will only serve to undo decades of progress.

Since the 2014 elections, Indonesia has seen a sudden spike in Sinophobia; an irrational fear of anything perceived to be Chinese. A new term emerged in the discourse during the 2014 elections: antek aseng. The term aseng is a distortion of the word asing, which means foreign and is often derogatorily associated with malicious Western interests. Sukarno was an anti-asing President who rejected any kind of aid the West offered in his infamous slogan “To hell with your aid”. Aseng in this sense refers to Chinese foreign interests, which are similarly perceived to be invasive.

Contemporary Sinophobia is commonly targeted towards Chinese-Indonesians, who have been struggling with their identity politics since the 20th century. It became apparent in the 1998 riots, when Chinese-Indonesians — whom were perceived to wield significant economic and political clout (the Suharto government embraced Chinese-Indonesian conglomerates) — suffered judgment by the mob. Their houses were set ablaze, their belongings looted, and the women raped. Ever since, a subtle divide has always been present among Indonesians (pribumi) and Chinese-Indonesians (often called cina derogatorily). Instances of Sinophobia have occurred here and there, such as sexual harassment.

In a recent string of events, a video of Jakarta’s gubernatorial candidate, Basuki Purnama (or Ahok), in which he quoted a verse from the Quran has drawn the ire of many extreme Islamists. The verse in question was Surah Al-Maidah 5:51. In an edited version of his speech, Ahok advised voters to not be lied to by that particular Surah. Although later it turned out that Ahok was advising voters to not be lied to by people using that particular Surah — which was a small yet crucial part that was left out — Ahok is now on trial for blasphemy and could face up to 5 years in prison.

Ahok is a unique case in Indonesian politics. He is a dual-minority: a Chinese-Indonesian and a Christian. While he has had a proven track record of making Jakarta a more bearable place to live during his short interim period after Jokowi left and became President, most of his political opponents often play the race and religion card against him. This is especially capitalized by extremist Islam groups, such as the violent FPI. The FPI’s rhetoric is simply binary: as a majority Muslim region, Ahok cannot be the leader, for he is not a Muslim.

Similarly, the Sinophobia card has also been played against Jokowi in the 2014 elections. Despite being Javanese, his political opponents (often through shady websites and other proxies) have repeatedly claimed that Jokowi is an antek aseng or supporter of foreign Chinese interests using whatever flimsy evidence they can muster. Jonru Ginting, a vocal and narcissistic “social media activist” who began to gain popularity during the 2014 elections, has often “criticized” and accused Jokowi of many things, but one of the most repeated rhetoric goes along the lines of, you guessed it,… antek aseng. In this particular post dated 11 November 2014 (which he re-referred back to in 2016), he described Jokowi’s APEC speech as a sales pitch to Chinese investors, of whom which Jonru perceives to have malicious interests in Indonesia (hence the “Indonesia for sale” tagline). 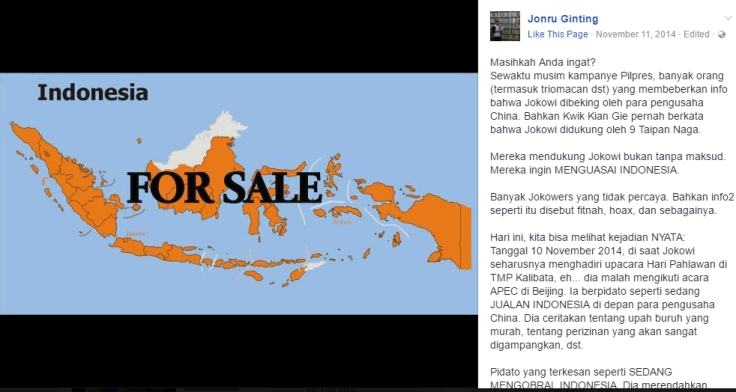 This is just a small glimpse of the simmering Sinophobia in Indonesia, but it shows that Sinophobia can be a powerful political weapon, especially in a country where most of their social media users lack a sense of critical thinking and a case of sharing without verification. Ahok’s blasphemy case was largely fuelled by racial tensions. It did not matter what he said (ha later formally issued an apology for his remarks) and what evidence emerged later that proved his innocence; the fact that he’s Chinese and a Christian seems to have clouded the judgment of the populace. His political opponents in the Jakarta gubernatorial election seem to be quietly enjoying his moment of turmoil, since now, the most powerful candidate is practically out of the running.

And here’s where I get all fussy about why we can’t let this kind of Sinophobia remain, as it is extremely harmful to the democratic process. Because of Sinophobia, a decent man has to face a large amount of bullshit from a corrupt judicial system, backed with corrupt politicians; while extremists who openly preach hate and subversion get to walk free.