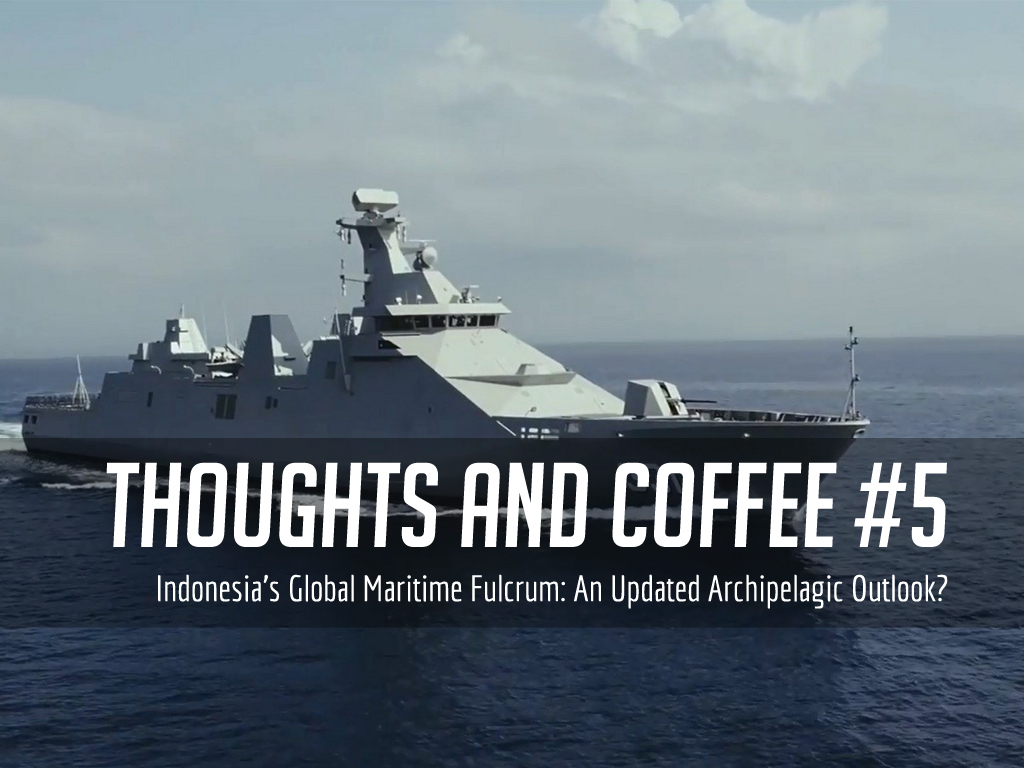 This article was originally published in The Diplomat, 17 December 2016.

The Archipelagic Outlook concept was conceived due to the disadvantages brought upon Indonesia as an archipelagic state prior to the implementation of the Djuanda Declaration in the UN Convention on the Law of the Sea (UNCLOS). Prior to the implementation of Exclusive Economic Zones (EEZs), the territorial waters between Indonesia’s islands were considered to be high seas where freedom of navigation applied. In Indonesia and the Law of the Sea (1995), Hasjim Djalal makes the case that the previous three-mile limit ordained by the Ordinance on Territorial Waters and Maritime Zones of 1939 had caused pockets of “high seas” to be present between islands in Indonesia. These maritime “holes” allowed foreign fishing boats and vessels to freely use the seas, often for purposes that were perceived to be harmful to Indonesia. Indonesia then started a long legal battle with the international community to gain special rights for archipelagic nations, which would later result in Indonesia’s Djuanda Declaration, which introduced the 12-mile limit and the EEZ into what would later become UNCLOS.

However, such an introverted stance cannot be sustained in this age of interconnectivity. It also cannot be maintained as a guideline if Indonesia were to start expanding beyond the archipelago and seek to influence its surrounding environment. Sebastian et al. criticized the concept as being unable “to keep pace with the regional maritime strategic environment, let alone to shape and influence it.” To some extent, this critique holds true. Due to the inherent inwardness of the Archipelagic Outlook, defense strategies have generally been tailored toward maintaining the integrity and unity of the country.

This is reflected in previous Defense White Papers starting from 1997, where a substantial amount of ink was used to identify threats that may jeopardize the unity of Indonesia from within. The main emphasis continues to be on separatism and terrorism, with a lesser focus on internal maritime security threats, such as illegal fishing and smuggling. The 2015 Defense White Paper is no different. It briefly mentions the need for maritime surveillance for internal waters, but lacks a comprehensive assessment of the external maritime environment (the Indian Ocean and even Pacific Ocean) and Indonesia’s maritime interests, especially in regards to the Indian Ocean.

At a glance, the six principles and seven pillars of the GMF indicates a shift in Indonesia’s maritime outlook. The primary difference is in the clear statement of maritime diplomacy and economy as pillars of Indonesia’s maritime strategy. Both areas would require extensive cooperation with Indonesia’s partners, especially considering the maritime boundaries and existing responsibilities that Indonesia shares with Singapore and Malaysia. One could also extend this role to the multilateral level, especially in the South China Sea. However, the publication only offers a glimpse of the means to which Indonesia will achieve these ends.

There are already some concrete examples of Indonesia’s attempt to break free from the Archipelagic Outlook’s introverted nature in the defense and diplomacy dimensions. A recurring theme is an emphasis on building bilateral and multilateral relationships related to the maritime sector.

In the diplomatic realm, Widodo has strived to improve relations with bilateral and multilateral partners on maritime-related issues. One important issue that Indonesia still has with its neighbors is the lack of settled maritime boundaries. Without clearly delineated boundaries, Indonesia risks getting into trouble with potential friends and losing political legitimacy. In 2014, Indonesia concluded a maritime border dispute with the Philippines. However, there’s still work to be done, considering Indonesia has other disputes with Malaysia and Australia. Once boundary problems are cleared up, maritime diplomacy will arguably progress a lot smoother.

Aside from increasing cooperation, the Indonesian Navy (TNI-AL), amidst budget cuts, is steadily progressing to acquire new equipment and conduct further training to ensure the security of Indonesian waters and potentially become a green-water navy that can conduct a wider range of missions. Indonesia is also expanding its maritime security management by introducing the Badan Keamanan Laut (Bakamla, or Maritime Security Agency), which is expected to act as a coast guard separate from the Navy. So far, Bakamla has foiled 86 smuggling attempts in Indonesian waters. It is also expected to be provided with new equipment in 2017 to increase its performance. The combination of Bakamla and TNI-AL may then allow Indonesia to be more involved in maritime security in ASEAN, such as in tackling piracy in Indonesian waters and Malacca Strait, and even possibly, the Indian Ocean.

The GMF may seem like the Archipelagic Outlook with a new coat of paint. In many aspects, it indeed inherits many of its predecessor’s attributes, such as an emphasis on territorial integrity and strengthening Indonesia’s crossroads position between two oceans and continents. However, unlike the Archipelagic Outlook, the GMF aims to reach out to potential partners, both bilateral and multilateral. It marks a departure of the previously introverted Indonesia to an Indonesia that is progressing to be more extroverted.

It would be wise to exercise a degree of scepticism as to the extent of this departure. One should not forget the land-oriented strategic culture that continues to permeate Indonesian strategic thinking. Although the GMF may be a departure from the inward-looking Archipelagic Outlook, one should not discount the pervasive influence of a land-oriented strategic outlook as a significant hindrance in the implementation and development of the GMF as an entirely new strategic outlook. Perhaps the GMF will only be implemented fully once policymakers in Indonesia can agree that the way to the future is outward, rather than inward.