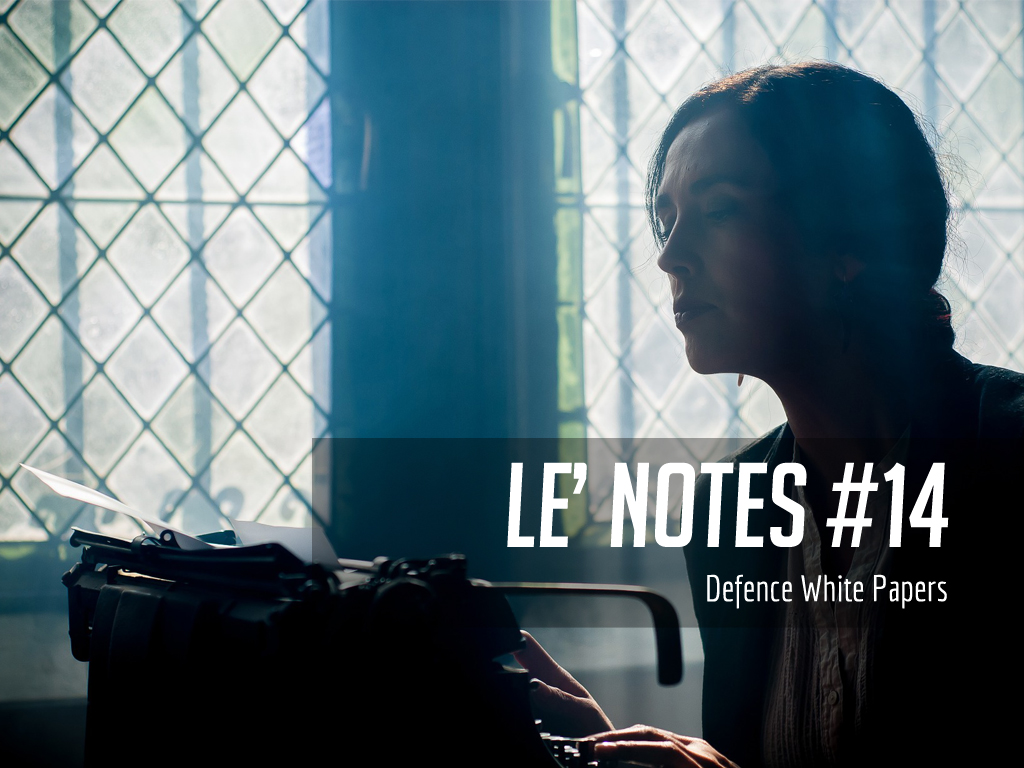 This post provides a brief summary of what a defence white paper is and how it is constructed.

How do governments communicate their defence interests to others, especially their people and other international actors? While a press released would be the most cost-effective way, it’s kinda hard to cover a lot of ground in five minutes. The most comprehensive way to do so is by publishing a Defence White Paper (DWP) that is accessible to anyone. The DWP supposedly provides information about the many security and defence issues the country is either involved in, interested in, or is simply concerned with.

So, what exactly is a DWP and how is it made?

Many might consider a DWP to be an authoritative document that indicates the government’s stance in a set of security/defence issues. In some cases, that is true. The DWP is indeed a document that describes relevant security problems and ways to solve them.

Like most policy documents, a DWP is a cross between objective and subjective analysis. On the objective side, the DWP assesses the strategic environment around the country and describes security issues as they are. For example, the facts state that North Korea is conducting nuclear tests and China has lost the PCA ruling over the South China Sea. Such are the issues as they are. On the subjective side, the DWP iterates the country’s stance on these issues and then, subjects them to the “policy treatment”. What I mean here is that the government (usually Ministry of Defence) then goes through these issues, ranks them based on a subjective scale of urgency, and then proceeds to argue how the country will address these issues. It sounds a bit oversimplistic, but overall, that’s how a DWP works. So, to recap, a DWP is a persuasive, authoritative document that outlines security issues and proposes solutions on how to deal with those issues.

As such, no two DWPs are alike, even those produced by the same country. Governments change, security outlooks change, and even security issues change as time goes on. Similarly, no two countries hold similar strategic outlooks due to differences in culture, geography, etc.

In an ideal world, the DWP is also a tool of democracy. The “white” in DWP refers to the metaphorical state of the policy; that it is meant to attract informed comments which would be beneficial for the construction of actual policy. In other words, a DWP could ideally function as a tool for governments to get feedback from their people and other audiences on their proposed security policies and then construct them based on these comments. Normally, this function is reserved for expert staff and academics, who would be the people you’d expect to be doing that kind of stuff. I can’t imagine a mixed rice vendor having the time to go through a DWP.

I’d rather not go through the actual, intricate political process of designing a DWP as it differs heavily based on country and to be completely honest, I don’t even know which parties are directly or indirectly involved in that process.

Moving on, we’ve understood that a DWP is a “personalised” document that deals with security issues plaguing a country. So, what is included in a DWP?

For starters, there is no universal, standardised guide on what should and should not be included in a DWP. Perhaps one country wants to be completely transparent about their security threats, while the other just wants to publish a DWP for good PR and to provide an illusion of having things in control. Both of these intentions are okay.

We can draw several generalisations by comparing and contrasting DWPs from different countries. For this exercise, I compared the structure and, to a lesser extent, content of two different DWPs: the Defense of Japan 2015 and the 2015 Indonesian Defence White Paper. Here’s what the two DWPs have in common.

First, the two DWPs, though differing in style, can be roughly divided into two major parts. The first part includes an assessment of security issues and previous defence policies. This is the objective part of the DWP. The second part includes policy recommendations — either proposals or policies already implemented.

For example, the Defense of Japan provides a comprehensive overview of the current state of affairs in Northeast Asia, which includes important developments in Japan, South Korea, North Korea, Russia, and the United States. It then proceeds to outline Japan’s existing security policies and proposed plans to improve those existing policies, such as strengthening the US-Japan partnership and enhancing multilateral defence cooperation.

Similarly, in the 2015 Indonesian DWP, the first part includes a comprehensive bird’s-eye view of Indonesia strategic outlook, from traditional to non-traditional security threats, with an emphasis in Southeast Asia. It then subsequently outlines Indonesia’s existing security architecture (e.g. bela negara and defence management) and plans for future development of national defence assets, such as the national defence industry, and multilateral defence cooperation through international organisations.

Second, both DWPs differ in terms of information presented. The Defense of Japan 2015 is a pretty comprehensive document that’s almost 400 pages in length, while the 2015 Indonesian DWP is only about a quarter of its Japanese counterpart. The difference in content shows, to a certain extent, the scope of security issues the respective countries are interested in. Japan’s DWP has a section devoted to cyber security and space security, which the Indonesian DWP lacks; likewise, the Indonesian DWP has some sections that are unique of itself, such as the bela negara chapter. Once again, this is perfectly fine, as the DWP does have to incorporate the interests of the state writing it.

It can also tell you a bit on how transparent the countries are regarding their security issues. The Japanese DWP is rich with information and data, and if you peruse the supplementary documents (known as the Mid-term Defense Plan and National Defense Planning Guidelines), you will see that Japan is intent on presenting a clear and comprehensive review of its defense. Whether the information is factual is besides the point; what matters is it provides us with information on how the Japanese understand their security situation.  In contrast, the Indonesian DWP is largely vague and full of generic statements. You would need to peruse a bunch of other documents and regulations and piece them together to understand Indonesia’s perspective on security issues.

Remember, there are no guidelines on what you can and cannot put in your DWP. It all depends on what the government wants to be included. Because of this, the analysis of security/defense policy cannot be an isolated discipline; a complementary part of security policy analysis is understanding how the government works in a country.

To recap, here’s what my DWP comparison resulted in: